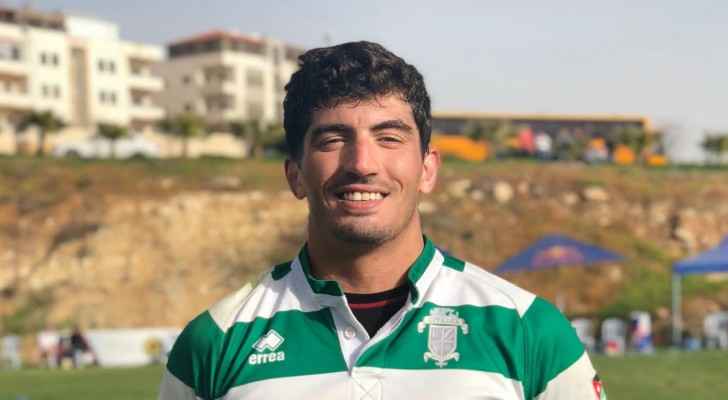 Current Captain of the Jordan national rugby union team and Captain of the Citadel club, Zaid Arabiat is a professional athlete with rugby possessing a special place in his heart. Arabiat holds a brown belt in Brazilian jiu jitsu and plays other sports like Muay Thai. In an exclusive interview with Roya News English, Arabiat talked about his interesting start, answered some of the common questions about the game, and shared some of his plans for the future. In numerous interviews, you mentioned that you’ve always been into sports. Growing up, what do you think made you pursue it professionally?

I have indeed been fascinated with sports since a very young age. I was that high-energy boy who is always on the move and never sits down. I’ve tried many sports in my life, but rugby is the one that I found my passion in.

In general, I’ve always preferred team sports over individual ones. And rugby simply stood out. I believe it’s due to the combination of its unique team spirit, sportsmanship, field planning and physicality.

Can you tell me more about your journey? How did you end up joining Jordan’s rugby team in 2003?

Just like most of Jordanian teenagers, I used to spend my weekends hanging out with friends in coffee shops. Back then, I have never knew what rugby was and had no clue that it even existed in Jordan. One day, a group of guys (who were total strangers to me at that time but some of them are considered as my best friends) walked in with a weird shaped oval ball. They approached our table and introduced the sport because they were on the lookout for new people to join their team. After a quick chat, they invited us to their practice session to see what rugby is. I accepted the invitation, went in the next day, and got hooked ever since.

Do you remember how your parents reacted about you joining a rugby team?

At first, they were surprised of my choice of a not-so-common sport. But soon after, they couldn’t but see how much I love it and enjoyed every moment of it. Why else would a 19 year-old wake up at 9:00 AM on a Friday, every Friday, and go to a two-hour practice that is physically exhausting? Though, to be honest, I believe they didn’t expect me to go as far or to be as serious as I was, and still am, about it.

Knowing rugby, and as any parents would, they were a little worried about their son playing a sport with lots of physical contact. I’ve also had my share of injuries which raised the frequently asked questions of “so now what?” and “you will keep doing this?” and my answer was always the same: “YES!” Year in and year out, the questions faded away and my parents became more supportive of me playing this sport. You have a BSc in Mechanical Engineering. Do you plan on using it, and if so, would it affect your sport career?

I pursued a career in petroleum industry as a drilling engineer and supervisor. Unfortunately, all the love I have for the game cannot realistically support a living, especially here in Jordan. However, I’ve been rather lucky in juggling both work and sports. My managers have always been understanding and supported me a lot to take time off when needed in order to travel and play with the team. I am still working with my BSc degree, and I am not planning on stopping any time soon.

The most rewarding in my opinion is a big tough win after putting all of your efforts as a team in the field. Nothing feels better than going into that pitch and winning with your teammates, knowing that everyone has done their part perfectly. One of the most challenging parts is bouncing back in a game after being trailed in score, yet when conquered, this is one of the most satisfying challenge. Now that rugby has a fan base in Jordan, have the acceptance standards of choosing rugby players changed through the years?

Not at all! Unlike what most people think, rugby can be played by anyone regardless of gender, age, and physical abilities. All that matters is one’s dedication and love for the game.

In Jordan, what would you say is still the biggest misconception about rugby?

In most interviews that I have done, the interviewer always refers to rugby as a “violent” sport. Rugby is far from violent, it’s physical, and requires physical strength, the sportsmanship and discipline in rugby is unmatched in any other sport. Also, and just as important, the thought in everyone’s mind that rugby is filled with injuries, although physically demanding, rugby is not a game where you will leave the pitch injured after every game, players’ safety is and always has been one of the most important aspects of the game, and I can say in confidence that the coaches in Jordan are very competent and will not allow any player to play a full contact game if they see he is not ready for it. But we keep hearing that rugby is a dangerous game. How safe is it for kids?

Part of preparing kids for rugby is staging them into the game, starting with touch rugby and tag rugby. Full contact rugby comes at a later stage. The coach will always make sure that players are well taught on how to safely deliver and receive a tackle.

Have you ever suffered a serious sports injury, how did you cope?

I’ve had my share of injuries, but then again, rugby is just like football or basketball, and injuries are part of the game. The most important thing is never to hate or judge the game because of a misfortune injury. I always take proper care of my injury in order to get back to the sport as quickly as possible.

The Jordan rugby Committee has recently been promoting rugby to youngsters through attending recent events such as’ open-days in schools. How do you spark kids’ interest and how do you keep them interested?

Kids are enthusiastic and energetic, and the most important thing for a child is never the sport itself, especially in the beginning, as they want to play and enjoy their time. So, we try and make the atmosphere feel like fun and games while practicing.

What do you want to tell parents who have their doubts about allowing their kids to play rugby?

I would tell them rugby is a sport that teaches a lot in terms of discipline, sportsmanship and pride, and it is a safer environment than commonly thought. We have some good competent coaches available in the country that will take care of your children. Do you see yourself coaching a younger generation of rugby players in the future? And if you were to coach, what would you do differently?

Probably one day. I haven’t really put much thought into it. But I have however taken part in coaching kids at Zaatari camp and it was an enriching experience. If I were to coach, I’d encourage players to watch more rugby and believe in their potential.

Let’s go two years prior to you joining rugby. What do you wish was different back when you were 16?

I wish I knew rugby existed in Jordan so that I would have started at even a younger age. And I wish that my dreams were a bit more realistic, as I have always aimed for the sky when I was younger.

PUBG champions head to Egypt to represent Jordan in the ....

PUBG champions head to Egypt to ....

Captain Majid making a comeback with brand new episodes in ....

Captain Majid making a comeback with ....