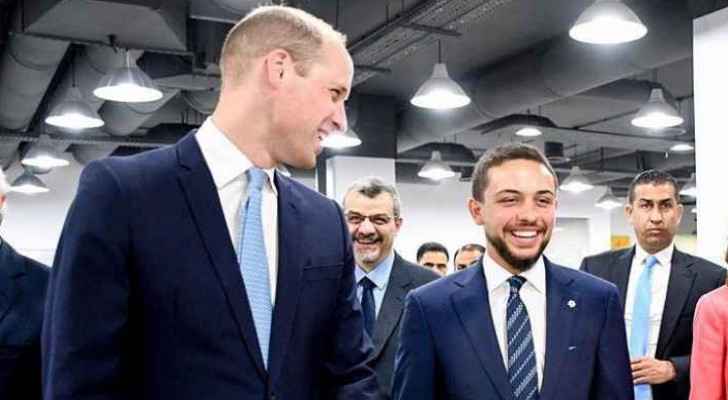 Prince William, Duke of Cambridge, arrived in Jordan on Sunday and started his regional visit by visiting the Crown Prince Foundation (CPF), or the FabLab, where he was shown a number of inventions presented by Jordanian youth, Petra news agency reported.

Prince William was personally driven to the FabLab, by the Jordan's Crown Prince Al Hussein, who is currently the reagent while the King is on an official visit to the US.

They were received by CPF CEO, Tamam Mango, who showcased the work of the foundation, highlighting the facilities of the TechWorks FabLab, which is equipped to promote technical education and bring together youth, ideas, and resources to unleash the power of Jordan’s innovation ecosystem.

Students presented engineering projects of their design and construction, including 3D printers, a drone, a robotic arm, Bluetooth-controlled table lamp, and a dual axis solar source tracker and a prototype of the nanosatellite.

Later on Sunday, Prince William spoke at a reception at the British Embassy in Amman, praising the 'historic ties and friendship' between Britain and Jordan.

“The interchange between our two countries is real and it's deep,” the British royal said. 'Work, study, tourism and family links. Our historic ties and friendship are played out in the lives of thousands of people who consider both countries home,” he added.

During his two day visit to Jordan, Prince William is scheduled to also visit the archeological site of Jerash as well as the British army base located in the outskirts of Amman.

Prince William will become the first member of Britain's royal family to pay an official visit to both Palestine and the Israel. The Duke of Cambridge will meet Palestinian president Mahmoud Abbas and Israeli PM Benjamin Netanyahu during his five-day tour.

The Kensington Palace spokesman said, “The historic nature of this tour is of course important and the duke considers it a great privilege to be undertaking the first ever official royal tour of Israel and the Occupied Palestinian Territories and to be able to help further strengthen the friendship between Jordan and the United Kingdom.”