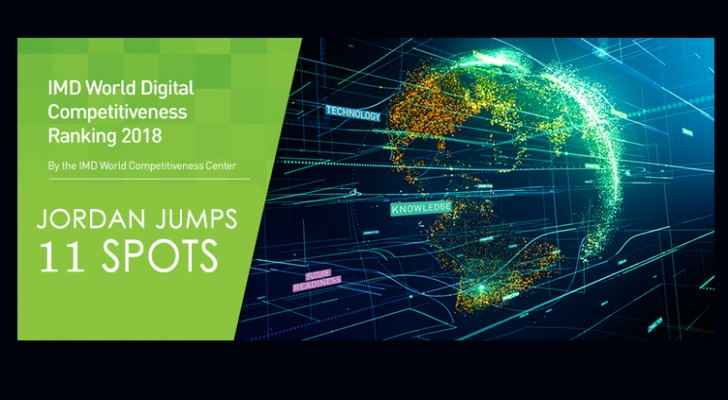 Jordan climbed 11 spots on the IMD World Digital Competitiveness Ranking 2018, which was released by the Swiss center on Tuesday.

The kingdom is the only country to record a double digit hike and is the highest upward mover, with Japan and South Korea climbing five spots respectively.

In this year’s edition, Jordan was placed 45th out of the 63 countries ranked globally and last among the four Arab nations on the list.

The kingdom is preceded by Saudi Arabia by three spots (42), while the first Arab country on the list is UAE, occupying the 17th place, followed by Qatar at 28.

According to the study, improvements and declines occur across continents, with 29 experiencing improvement, 26 decline, and eight remained in the same position.

The USA jumped two spots and leads the ranking, followed by Singapore, Sweden, Denmark and Switzerland.

The study assesses digital competitiveness based on 50 criteria of the economy under three factors- knowledge, technology, and future readiness.

In order for countries to adapt, explore and make the most of the digital transformation, the center issues the ranking in order to encourage the transformation of government practices and society in general.