Amman weather will be partly cloudy with possible rain showers. 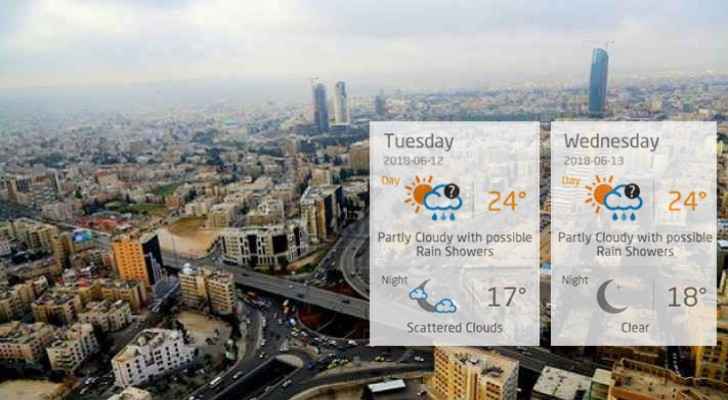 Rain showers are expected to visit Jordan during the upcoming two days, marking a rather uncommon weather condition as it rarely rains between the months of May and October.

Scattered showers are likely to affect the northern regions and will later spread to reach the central areas of the kingdom, including Amman, according to Arabia Weather.

Temperatures in Jordan for the month of June have hovered around 30 °C but the kingdom is to witness a temperature drop of four to five degrees starting Monday night and lasting until Wednesday.

The temperature forecast is significantly below its annual average, as it is expected to range between 20-25 °C during the day and drop to 17 °C during the night.

This case of summer rain, though rare, is not unprecedented as Jordanians have experienced something similar back in 2012 and 1992, where thunder showers also occurred during the month of June.

As for the Eid Al Fitr holiday, which starts on Friday, the weather is expected to be clear and sunny with temperatures reaching 30 °C.