Jordan and Saudi Arabia one and the same? (Twitter) 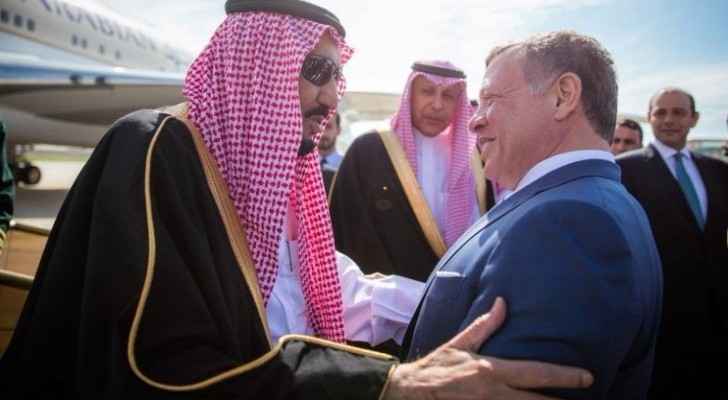 Saudi Arabia announced in a statement on Saturday that it will be holding a summit on Sunday, along with Kuwait, the UAE and Jordan, to discuss potential ways of helping Jordan come out of its current financial crisis.

Soon after the announcement was made, the hashtag “Saudi Arabia and Jordan are one” began trending on Twitter, resulting in more than 114,000 tweets under the hashtag up until now, Al Ghad newspaper reported.

Many Jordanians were skeptical about the Gulf State’s offer, pointing out that "there's no such thing as a free lunch."

Facebook user Shoroq Alkhateeb asked: “Why do we want those governments to help us, there is always a catch with them. That is the wrong path to take.”

Another user, Huda Lhm, was equally unconvinced: “And what do they want in return?!”

Others had an alternative theory: Ziad Abed Al-Wahhab wrote: “If Jordan accepts to officially become an alternative homeland for the Palestinians, then the Gulf countries will solve Jordan's economic problems and will invest in Jordan and build new cities and launch projects to attract Palestinian refugees from neighboring Arab countries and from the West Bank. It's all in line with the deal of the century.”

Adnan Ali concurred, saying that “Nothing is for free, even from brothers and family, there are conditions that come with aid. Jordan will be the centre theatre concerning the deal of the century. In fact, I think Jordan is being blackmailed to accept the offer or else, raising taxes was nothing more than the tip of the iceberg. More to come.”

Others demanded that the Jordanian government relies on itself, as the country struggles to curb its debt after securing a $723-million loan from the International Monetary Fund (IMF) in 2016.

“I wish Saudi Arabia wouldn’t send us (Jordan) any money… money should come through investments and it should come from honorable investors, otherwise, every year we will fall back into the same problem. The government needs to get used to relying on itself,” Twitter user @AdvShaat said.

Shoroq Alkhateeb agreed: “We don't need them. We have to start to rely on ourselves, that way we can support ourselves, we are grown up, let's start acting like adults.”

“All my respect and love for the Saudi people; since the beginning of the protests (in Jordan) they never hesitated to pray for us, and now King Salman is supporting us. Tremendous thanks to him and may God protect Saudi Arabia from all harm,” Twitter user @hiba_khattab said.

Meanwhile, Saudis were full of pride of their country’s generous gesture, while many showed affection for the Jordanian people.

Twitter user @Riemx7 noted that Jordanians “opened their doors for the Palestinians, many of whom carry Jordanian passports now; they’ve done the same with the Syrians and put them up in Al Zaatari Refugee Camp; they’ve given them everything they’ve got and now that their economy has collapsed, they deserve to have someone stand by them and support them.”

Saudi Tweep @121_hazza stressed that “Jordan and Saudi Arabia are one and the same country; they’re our neighbours, brothers and brothers by religion. May God bless Jordan and its people.”

Jordan blames its economic crisis on the political instability in the region and the lack of international support for the kingdom, after they opened their doors to hundreds of thousands of Syrian refugees since the war began in Syria almost eight years ago.