Protesters at the Unions' building in Shmeisani on June 6. 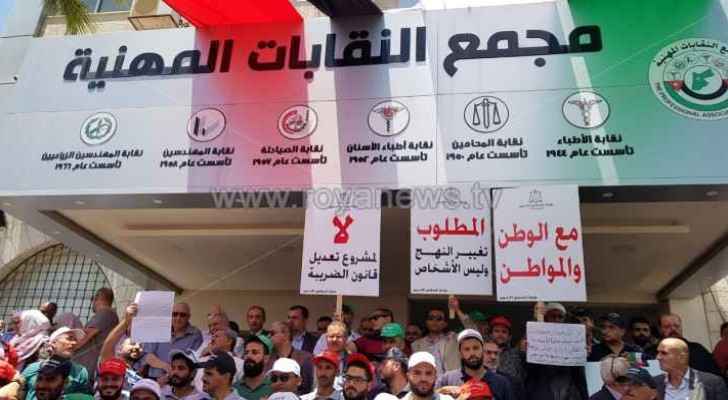 The Union’s Council convened an urgent meeting after protesters at the unions building expressed their dissatisfaction at the prospect of halting the protests in order to allow Prime Minister Omar Razzaz to form a Cabinet, respond to public demands and instigate change.

The council president, Ali Abous, announced to the protestors earlier on Wednesday that the council may decide to put the protest on hold. The unofficial decision was rejected, which led to an urgent meeting to decide the fate of the protests.

Jordan Bar Association President, Mazen Irshadat, also agreed with Abous and insisted that the Unions’ Council had no other choice but to wait until the newly appointed PM forms a Cabinet, adding that the council is determined to maintain demands for economic reforms.

After the meeting President Abous presented a middle ground stand by asserting that giving the government the opportunity to respond to demands was not mutually exclusive with escalating protests.

Abous assured protesters that the council would not back down until the government rescinds the Income Tax Bill and reverses the changes to the Civil Service regulation, adding that House of Representatives Speaker Atef Tarawneh had also confirmed that the bill would be rejected even if an MPs held an emergency session.

Abous praised the the King for his acceptance of Hani Mulki’ resignation and his instructions for the government to initiate national dialogue to discuss the Income Tax Bill among among other economic measures.

In his statement Abous insisted that the country’s peace and security hinged on achieving economic justice and decent living standard for its citizens, adding that wealth generating companies that were privatized should be nationalized for the benefit of Jordanians.

Thousands of union members joined the sit-in at the Unions’ building in Shmeisani at 1 p.m. for the second Wedensday. It is unlikely that a similar protest will take place next week if, until then, the the new Cabinet has not met demands, but that does not mean that independent protests will be put on hold.