Tarawneh: Parliament is not in the pocket of the Cabinet or the IMF

Atef Tarawneh addressing the press ahead of the meeting. (Roya) 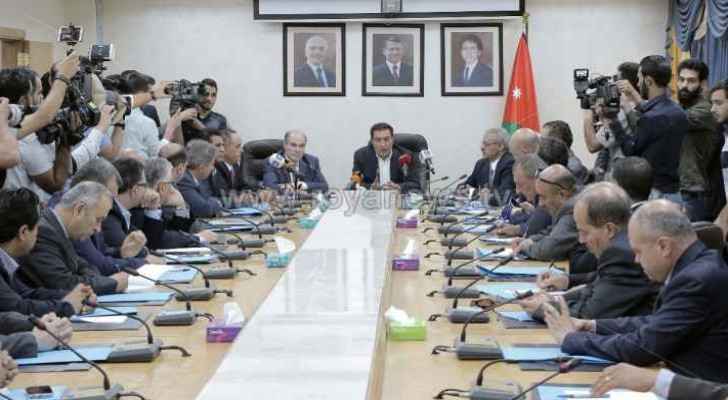 In a press conference ahead of the meeting between Jordan’s Speaker of the House of Representatives, Atef Tarawneh, Unions’ Council President, Ali Abous and PM Hani Mulki, Tarawneh relayed the representatives’ decline to consider the Income Tax Bill.

On behalf of the MPs Tarawneh relayed that 82 of them had signed a memo declining to debate the Income Tax Bill in an extraordinary session.

Tarawneh addressed reporters before the meeting telling them that after he makes his statement the three sides will hold a discussion behind closed doors.

The meeting was held in the building of the Lower House of Parliament on Saturday afternoon, following a meeting of MPs to discuss the Income Tax Bill and the Civil Service Regulation.

Tarawneh applauded the Unions’ Council for its organization of the Wednesday strike and posed that the Cabinet’s lack of discussions ahead of drafting the bill with relevant institutions such as the parliament, unions and, trade and commerce chambers led to the mass protests.

He insisted that Jordan was “bigger than any laws or parliaments,” and added that the House of Representatives “was not in the pocket of the Cabinet or the IMF.”

Even though the parties failed to reach an agreement, Mulki and Abous asserted that the two parties will continue their discussions.