Salah was injured during his game against Real Madrid on Saturday. (Al Arabiya) 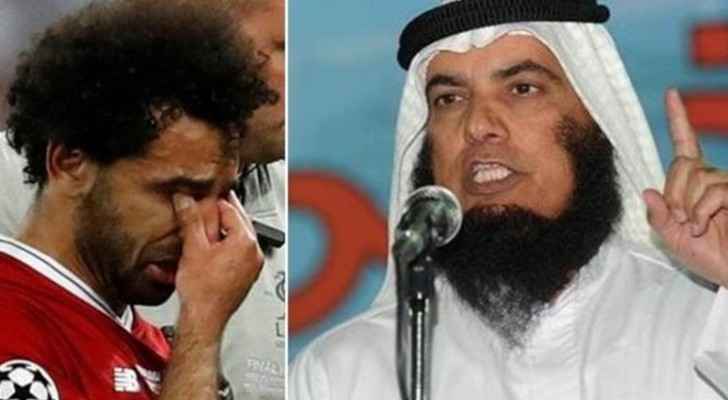 Millions gasped in shock when Egyptian footballer Mohamed Salah injured his shoulder during a critical match against Real Madrid on Saturday.

However, the 2018 Champions League final was the least of this Kuwaiti preacher’s worries, who was more concerned with Salah’s decision to break his fast during the holy month of Ramadan.

Cleric Mubarak al-Bathali tweeted on Sunday that Salah’s injury was a “punishment from God for breaking his Ramadan fast early.”

"The footballer Mohamed Salah decided to play for Liverpool without fasting, God punished him. No reasonable man, especially not a Muslim, believes life is managed by reason and effort. Life is in the hands of God. May God guide you, Mohamed Salah, and perhaps the injury is good for you."

In al-Bathali’s mind, a football game is not a “legitimate reason” to break one’s fast, something that Muslims are only allowed to do if they’re ill or travelling.

Several religious scholars disagree with al-Bathali, noting that footballers are allowed not to fast if they felt their health would be at risk, adding that they can make up for it by fasting another day after Ramadan.

Thousands of social media users were also vehemently against the cleric’s statement.

One person responded to al-Bathali’s comments with:

“Who do you think you are? Stop making rubbish statements. You cannot talk on behalf of God. He knows what He is doing.”

Another person noted that this was simply al-Bathali’s opinion.

“That’s your own opinion “Kuwaiti preacher” God is not wicked, Mo Salah can repay his fasting after Ramadan.”

This user urged the cleric to do more to attract people to Islam instead.

“Our religion is far nobler than you and other people attempt to depict. You should work on your messages so that people become more religious and are not shocked. God has allowed Muslims not to fast when they are traveling or when they believe there are hazards to their health. This is such a case.”

"OK, sheikh ... Muslim footballer Karim Benzema also broke his fast ... so how did the game work in his favor?"

Salah is one of the most celebrated football players in Egypt’s history. He has led his country to the World Cup - which takes place in Russia this summer - for the first time in 28 years.

The 25-year-old player will be flying out from Britain to Spain “to complete treatment for the injury under Liverpool’s supervision,” according to Egyptian Sports Minister Khaled Abdul Aziz.