In the video, the house owner was heard forcing the binman to say his full name. (Facebook) 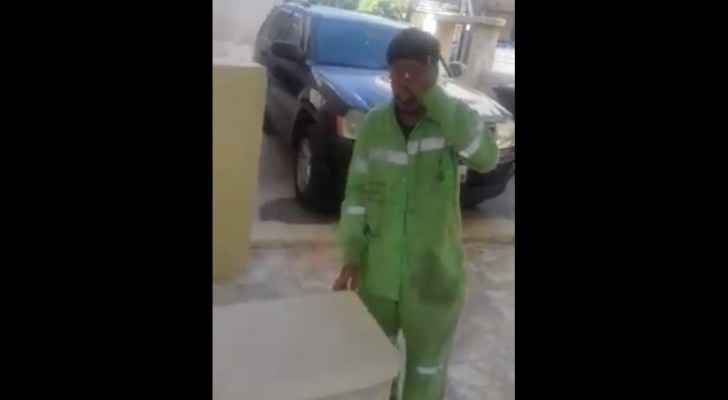 A video of a man dressed in a Jordanian binman's uniform while pleading for his dignity went viral on Saturday night.

In the 44-second clip, the binman revealed that he currently works at a restaurant and that the uniform he’s wearing is from his former job as a binman.

The person filming the video was the owner of the house that the binman had attempted to rob while pretending to clean it.

In the video, the house owner was heard forcing the binman to say his full name, out loud, to the camera. The binman complied.

The house owner was unforgiving. Unsatisfied, he proceeded to show the binman’s national ID to the camera.

Being taunted by the house owner only made the binman feel worse about what he had done, as he pled with him to give back his ID and forgive him, noting that this is his first time attempting to rob someone’s home.

Social media users were infuriated by the house owner, whom they condemned for filming the binman.

Despite Jordan going through tough economic times, with a large chunk of the population struggling to make ends meet, social media users did not use that as a justification for the binman’s actions.

However, the majority of the hundreds of people who commented on the video agreed that the house owner was absolutely wrong to publicly humiliate the binman.

They argued that the house owner has taken the chance away from the binman to repent for his action, and that he has now potentially put the binman’s family at risk of being bullied and disliked by the community.

Others said that the owner's only job should have been to hand the binman over to the police.

Many of the appalled social media users noted that since it is the holy month of Ramadan, the house owner should have been more forgiving and should have talked to the binman off-camera instead.

One of the most prominent comments was by the Facebook user Omar Alsubbagh, who wrote: “I think a good lawyer will sue for holding him against his will & for public humiliation, you are not the judge & Jury to carry out this kind of punishment against this poor individual.

“Yes he did wrong by trespassing into your house & impersonating a city worker, but let the law take care of that, not you. What you did to this man is totally wrong, unethical & immoral.”