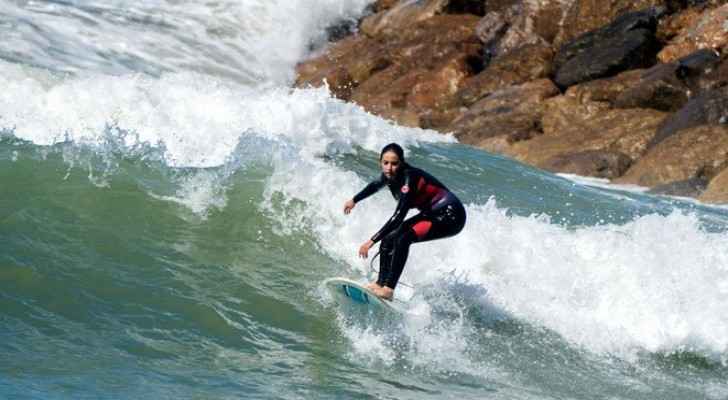 In the geographically-diverse Morocco, it’s become quite common to see Moroccan women ride the waves on their surfboards. However, not everyone is on board with this new phenomenon.

Some of these women surfers still get harassed for their choice of watersport when they’re back on land. Meriam, 29, is one of those women.

“It’s easier in the winter because the beaches are empty,” she said.

Like most women surfers, she too wears a wetsuit.

“In the summer we suffer a lot of harassment, that’s why we pay attention to what we wear.”

In this conservative society, most girls and women are prevented from surfing by their father or brother. Rim, a female Moroccan surfer walks along the beachside after a surf session in Rabat on April 1, 2018. (AFP)

Luckily for Meriam, unlike many other Moroccan women, she grew up in a “tolerant” family that allows her to practice the sport she enjoys most.

“Some families are ashamed that their daughters practice water sports.”

Some club members have seen a change in people’s attitudes towards women surfers over the years, and mentalities differ from beach to beach.

Rim Bechar, 28, said that when she began surfing four years ago, “it was a bit more difficult.”

“At first, my father accompanied me whenever I wanted to surf,” she said. But now, “people are used to seeing young women in the water, it’s no longer a problem.”

Today, she surfs solo, all day long, without facing any problems.

Those who still get harassed will either get disapproving looks from conservative men or unwanted comments. Meriem, a 29-year-old Moroccan engineer and surfer, exits the water after a surf session in Rabat on April 1, 2018. (AFP)

It is said that the first people to practice surfing in Morocco were soldiers from a French-American military base at the popular seaside resort of Mehdia; they took to the waves in the Atlantic Coast in the 1960s.

The surfing scene then quickly picked up by French and Moroccan enthusiasts.

Trump awards the King of Morocco the prestigious Order of ....

Trump awards the King of Morocco the prestigious ....

King of Morocco affirms his support for Palestine, ....