Lebanese actress Manal Issa holds a sign reading "Stop the Attack on Gaza" as she walks the famous red carpet in Cannes. (AP) 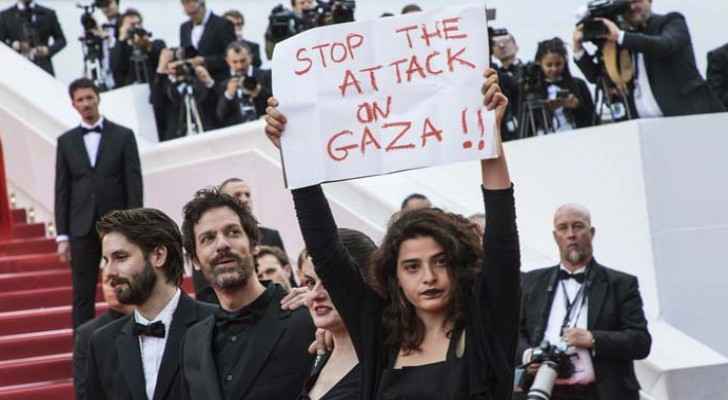 Dozens of film industry professionals at the Cannes Film Festival took time out from the glitz and glam to pay tribute to the 63 Palestinians who died in Gaza during clashes with the Israeli army along the Strip’s border.

Dozens of people, including Hollywood actor Benicio del Toro, stood in a circle and held hands outside the Palestinian pavilion on Tuesday; they held a minute’s silence for those killed during the protests.

Palestinian film producer and director, May Odeh, told Reuters that “it’s really crazy to be here with the films, with the filmmakers, talking about our future plans while our kids and families are suffering from the Israeli attack on them.”

This is the first year that Palestinian filmmakers were given their own pavilion to promote their work at the Cannes Festival.

Meanwhile, Lebanese actress Manal Issa held a sign that read "Stop the Attack on Gaza," as she walked the red carpet at the premiere of the Han Solo spin-off “Solo: A Star Wars Story.”

As she walks the red carpet for "Solo", French-Lebanese #actress Manal Issa holds a sign reading "Stop the Attack on #Gaza" as she walks the famous red carpet, in #Cannes, during 71st edition of the Cannes #Film #Festival in Cannes. #France #Palestine #Cannes2018 #Film #cinema pic.twitter.com/3PAMRWCZcg

Sixty three people were killed on Monday during violent confrontations with the Israeli forces along the Israeli-Gaza border, according to the Palestinian Ministry of Health.

The PNA explained that they refuse to glorify Israel’s image by showing them as compassionate or humanitarian.