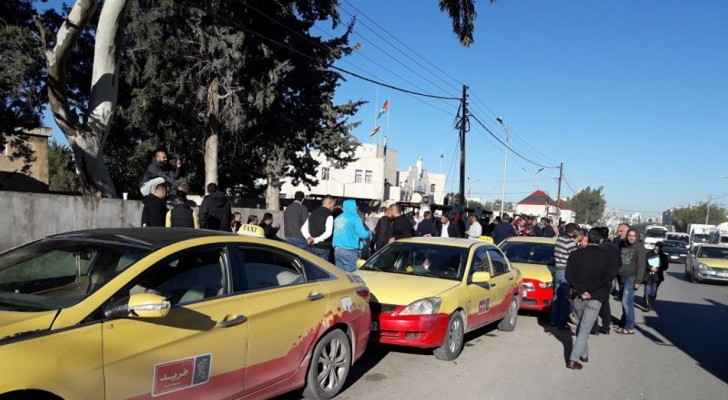 Yellow taxi drivers and owners gathered outside the governorate building in Irbid on Tuesday to in yet another protest against the government’s regulation of ride-hailing apps in the Kingdom.

This comes after the ban on the ride-hailing app Careem was lifted last week following the introduction of an amended by-law “regulating transportation services through the use of smartphone applications.”

According to the by-law at least 25 percent of the cars operating in a company that uses smartphone applications must be yellow taxis but according to taxi drivers the competition will drive down their income and the fees the apps charge drivers are a cost they cannot bear.

The protesters called on the Ministry of Transport and the Land Transport Regulatory Commission (LTRC) to retract the decision, complaining that these apps are robbing them of the means to provide for their families. Several drivers even brought their children to the demonstration, carrying posters and placards with phrases such as “I want food, my rights have been taken away by the corrupt.”

On the other hand, a ride-hailing app called Jeeny (previously EasyTaxi), which only uses registered yellow taxis, has failed to gain traction among taxi drivers as they felt the app’s calculated prices were not as lucrative as the customary fees they were used to charging.

Yellow taxi drivers in Irbid are known to disregard meters, often times refusing to turn them on or asking for additional fees during rush hours. Many residents in Irbid and across the country have resorted to using ride-hailing apps due to their predictable price rates despite the added costs. Amman's taxi drivers want Careem and Co. kicked to the ....