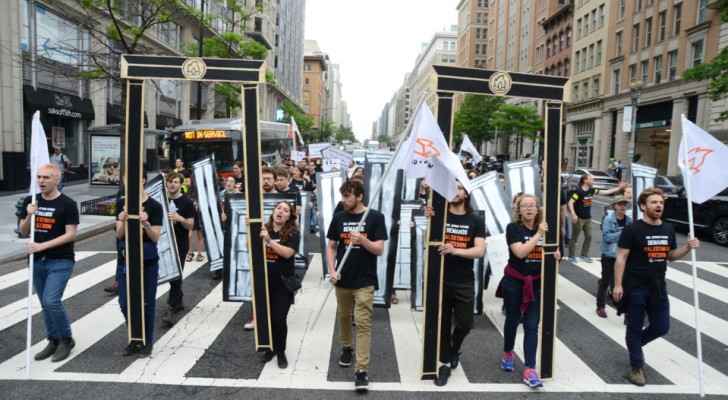 While US officials celebrated the opening ceremony of their new embassy in Jerusalem and Israeli forces killed over 50 Palestinian protesters in Gaza, 150 young Jewish-Americans in Washington, D.C. voiced their rejection of the embassy relocation, which only serves to entrench the Israeli occupation in a city that is already divided by violence and separation, the IfNotNow movement reported on Monday.

The protesters shut down a busy intersection in the capital for two hours while chanting in Hebrew and marched at the location of the Trump Hotel, where they set up their “Embassy of Freedom.”

Their T-shirts had various slogans including “Young Jews reject Trump’s embassy of occupation” and “The Jewish future demands Palestinian freedom.”

Protest organiser, Lila Weintraub, asserted that it was time that the Jewish community picked a side adding “Our generation knows that the Jewish future demands Palestinian freedom, and we hope that they join us.”

“Most American Jews oppose unilaterally moving the US embassy to Jerusalem, but our community’s institutions cheered the president’s cruel and provocative decision, made all the more provocative today of all days, as it comes on the heels of Trump withdrawing from the Iran deal and in the midst of unconscionable Israeli violence against Palestinian protesters in Gaza.” said Rachel Klepper, a member of IfNotNow who traveled from New York City to attend the protest. “Instead of cheering on their Embassy of Occupation in Jerusalem, I am proud to be building an Embassy of Freedom in DC with IfNotNow, a movement that represents the future of the Jewish community and knows that that future relies upon Palestinian freedom.”

The IfNotNow movement has organised protests in more than 30 cities to demand the end the American Jewish community’s support for the Occupation. This demonstration comes after weeks of Palestinian protests, where more than 40 Palestinian protesters in the Gaza Strip were killed by the Israeli military and thousands more were injured.