The annual ranking is released by Reporters Without Borders 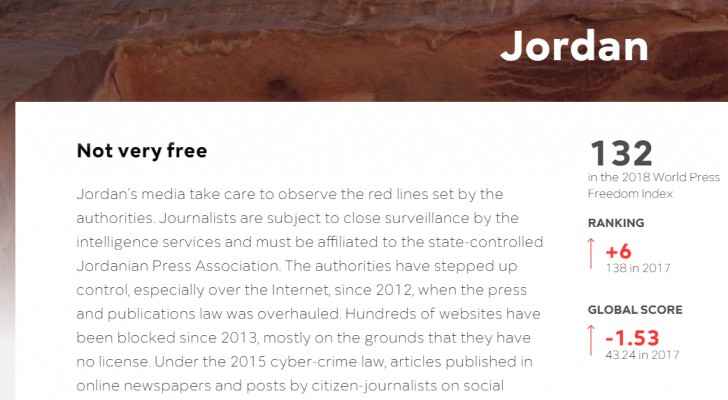 His remarks came during a session on the role of the judiciary in enhancing press freedom organized by the UNESCO Office in Amman on the occasion of the World Press Freedom Day. Momani asserted that societal values and freedoms are defended by Jordan’s independent judiciary.

The index is released annually by Reporters Without Borders and it is noteworthy that this year Jordan became 132 on the 180 country list, remaining in the bottom 30 percent and rated as “not very free.”

The country report expressed concerns over Jordan’s Internet freedom stating “Hundreds of websites have been blocked since 2013, mostly on the grounds that they have no license.”

Jordan’s 2015 cyber-crime law was criticised as “posts by citizen-journalists on social networks can be punishable by jail sentences and can constitute grounds for pre-trial detention,” the report reads.

Furthermore, the report assessed Jordan’s terrorism law as “extremely vague” and slammed gag orders and the prosecutions of journalist on security grounds as a way to “restrict the public debate and limit journalists’ access to information on sensitive issues.”

Report: MPs, writers are the most to publish hate speech

Report: MPs, writers are the most to publish ....

Report: MPs, writers are the most to publish ....