Local economic development was one of the claimed benefits of the reconstruction. 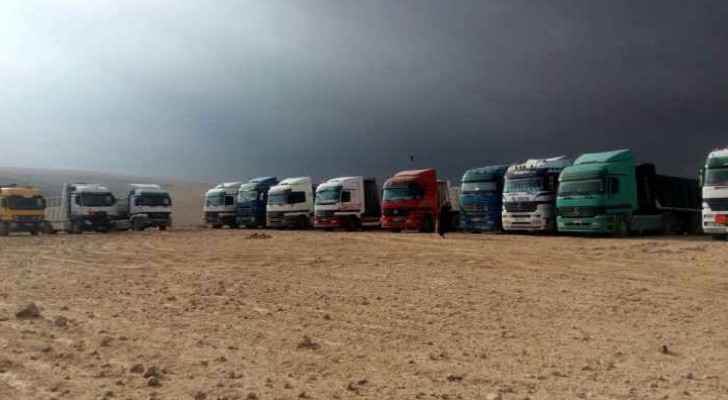 A number of lorry drivers staged a sit-in on Saturday morning next to the Desert Highway, in the Al Jizah District, the southernmost district in the Amman Governorate. The drivers protested against the companies working to revamp the highway as they did not employ local labour.

The drivers asserted they were being sidelined in favour of workers who were brought in by the companies and demanded that local drivers and lorries take priority.

The protestors cited promises made by the Prime Minister that one of the goals of the reconstruction was to employ local community members as part of measures to encourage economic development.

The drivers complained about the lack of opportunities and the negative impact the economic recession has had on their lives. They asserted that in light of the high unemployment rate, each lorry provided sustenance for more than six families.

The reconstruction of the Desert Highway spans over 220 kilometres starting at Queen Alia International Airport intersection and ending near the port city of Aqaba.

The Desert Highway has been dubbed the “road of death” and has come under increased scrutiny after a Jordanian MP died in a car crash in a detour in April. In the beginning of May, Minister of Public Works and Housing, Sami Halaseh, in cooperation with the Public Security Directorate placed officers, patrols and radars along the detours in order to help the smooth transition and monitor speed limits.

Ten days ago, Halaseh and Head of the Saudi Fund for Development’s (SDF) Technical Mission Abdullah Khweiter met with the three contractors in charge of the reconstruction.

During a guest appearance on Roya TV, the minister asserted that the road employed six Jordanian companies and costed JD 180 million to reconstruct. Halaseh stated that construction is divided into 70 sections, where each section is seven kilometers. On average 10 sections are being rebuilt simultaneously which produces 10 to 12 detours.

The road would be completed by the end of 2018 and according to Halaseh, funding was the only obstacle that had prevented them to start reconstruction earlier. He explained that the lifespan of any road is 20 years, meaning the reconstruction came 10 years later than it was needed.

Thousands of Jordanians demonstrate in support of ....

Thousands of Jordanians demonstrate in support ....

Thousands of Jordanians demonstrate in support ....

Thousands of Jordanians demonstrate in ....