Taxis parked at the gate of Salt bus station. 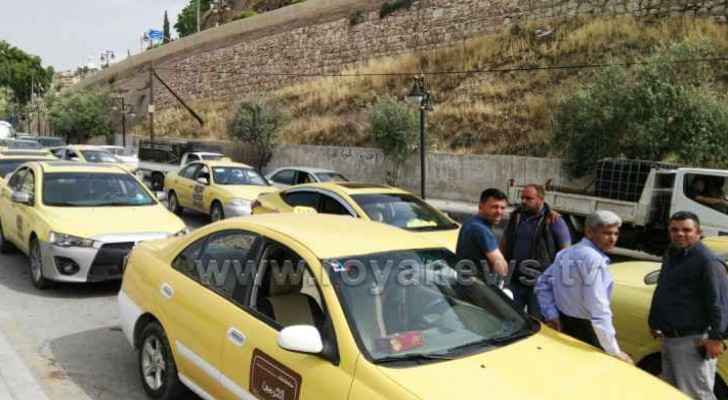 A number of taxi drivers in Salt, a city on a 30 km drive from Amman, organized a protest on Wednesday morning. Drivers parked their cars in front of the entrance to the city’s bus station in response to the lack of parking spaces provided by authorities.

The protest came after the traffic department recently forbade them from parking in the most lively street in the city center.

A group of taxi drivers explained that the traffic department had promised to establish specialized places for taxis to pick up and drop off passengers multiple times, but never delivered on that promise.

The annual license fee taxis pay include parking spaces and despite that they had not been provided with sufficient access to the city center without exacerbating traffic.

Parking spaces isn’t the only thing driving disgruntled taxi drivers in Jordan to protest. The process of licensing ride-hailing apps in the kingdom and the high fees for obtaining a taxi licence, which has a market price of minimum JD 40,000, has driven taxi drivers to the streets in protest.

Additionally, a large proportion of taxi drivers rent the cars they drive, adding to their financial burden. The fluctuation of fuel prices does not automatically reflect on the tariff they charge therefore making their income unpredictable.