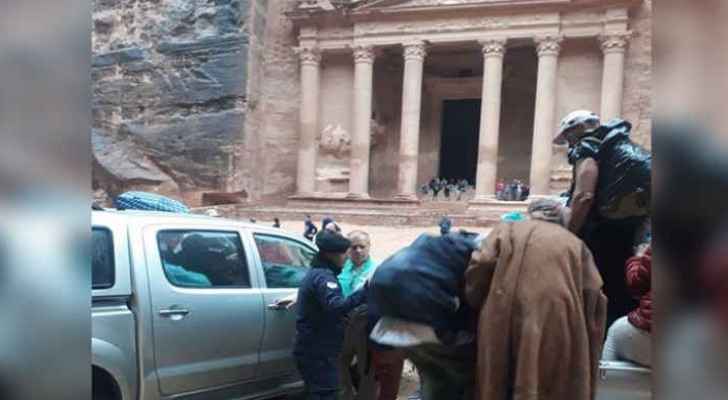 Upward of 6,000 tourists were evacuated from the popular tourist destination of Petra during the three-day weather depression that swept across the kingdom that started on Wednesday.

Coincidentally, according to Petra Development and Tourism Region Authority (PDTRA) Chairman, Falah Al Omoush, on Thursday the rose city received the highest number of tourists since the beginning of the year, around 5,200, Petra news agency reported.

Omoush indicated that evacuations were necessary as authorities wouldn’t take a risk with tourists’ lives. In coordination with relevant authorities, 30 vehicles equipped for rainy weather and 3 large buses were used to transport 1,800 of the 3,000 tourists in the city on Wednesday alone.

The about 5,200 foreign and Arab tourists that entered Petra on Thursday were safely transported out of the site without experiencing any incidents, Omoush assured.

The chairman elaborated that the archeological site had a drainage system that was not suited for the unexpectedly large quantity of rainwater it received. He acknowledged that the vastness of the site posed a challenge, especially when managing tourists but he also asserted that PDTRA’s strategies took that into consideration.

Tourists were not the only ones evacuated in Jordan. The Deputy Director of the Northern Badia Police, Col. Khalil Abdallat, told Petra news agency that dozens of families living in makeshift tents, mostly Syrian refugees, were settled in nearby mosques and schools in Mafraq’s northern Badia on Friday.

Additionally, Baghdad International Road near the area of Hamidiya was closed in both directions due to the rising water level on Friday. According Abdallat, Northern Badia police are on site in order to guide travelers to safety.