Jordanian teachers during their strike. (Roya) 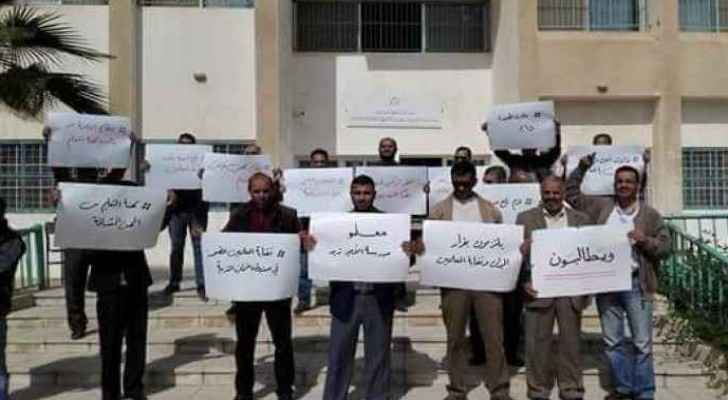 Jordanian teachers went on a partial strike on Thursday morning, according to the Jordan Teachers Association (JTA). The teachers were warned that things would escalate if their demands to amend the civil service system were not met

The strike kicked off after the third class of the day and is scheduled to continue until the end of the school day.

This is considered as the first “escalation” by the JTA, which comes after the Prime Ministry rejected teachers’ proposed amendments on Wednesday.

Teachers had demanded that their performance-evaluation-system is changed and that the newly-implemented fingerprint system is scrapped.

Last Saturday, the JTA organized a sit-in at the Civil Service Bureau (CSB) in Amman to pressure the government into listening to their demands.

The JTA issued a statement which called for changing the new teacher-evaluation-system, where teachers will be rated according to a specific criteria, and should they be marked as “weak” for two successive years, then they will be dismissed from their position, according to The Jordan Times.

Commenting on the new fingerprint system, Hajaya said that the JTA is not "entirely" against the system, but is seeking amendments that respect the nature of the teachers' profession.