Mohammed Salah recieving the award of Player of the Year. (PFA ) 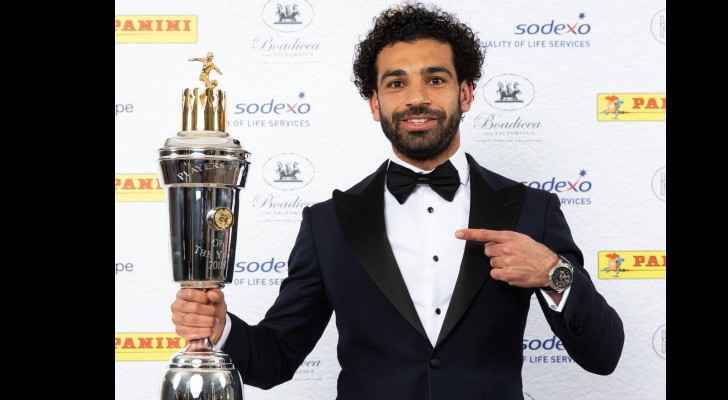 Salah was recognized by the 92 professional football clubs in England at a ceremony held in London on Sunday.

After Salah’s remarkable season, in which he scored 41 goals in 46 appearances for his club, he was able to beat off his competitors Kevin De Bruyne, David Silva and Leroy Sane from Manchester City, David de Gea from Manchester United and Harry Kane from Tottenham Hotspur.

“I feel great. I work hard and I’m very happy to win it,” Salah said commenting on the award.

The Red’s No. 11 attributed his outstanding success to the team and their collaboration with him. “The team helped me a lot, the way we play, they help me, they pass me the ball a lot. So the team help me a lot, honestly, to perform and be in that shape.”

Salah, who moved from Rome to Liverpool in July 2017, had become the first player to be named three times in one season as the Premier League’s Player of the Month in an outstanding season during his first year at the club.

Recently, as Salah became the first player to win the Premier League’s Player of the Month for three times in one season, he became a role model and source of pride in Egypt and the Arab world.

On social media, football fans from the Arab world and Egypt dearly celebrated the “Egyptian King” who despite his humble beginnings made it to the highest rankings in international football and competes alongside major football players worldwide.

Here are some tweets from Egypt following Salah’s win on Sunday:

Mohamed Salah will be the future Messi These prizes are only the beginning Salah his career is still long will achieve a lot and everyone expects that forward Ya Mo Salah you are the best @22mosalah ❤????✌

@22mosalah congratulations on becoming pfa player of the year,u totally deserve it and it pains me as I'm a manchester united fan but I give credit where its due

Yeh, one man can give happiness to all world,
One man can unite people's country and make them proud .
His personality defines him before looking to what he's doing , You'll love him even with no reason!" ???????? #MohamedSalah #Mo_salah