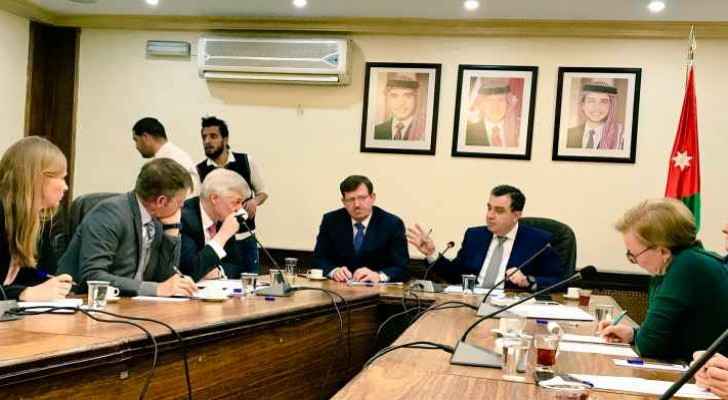 The Minister of Planning and International Cooperation, Imad Fakhoury held a meeting with the ambassadors of donor countries supporting Jordan in dealing with refugees in the ministry (MoPIC).

The meeting mainly discussed the establishment of a mechanism for providing healthcare to refugees and was attended by Minister of Health, Mahmoud Sheyab, where he presented the cost incurred by the ministry of health and the resulting gap in funds. He assured the ministry was willing to cooperate with donors in order to find prompt solutions to the shortage of medicines and vaccinations.

Fakhoury acknowledged the support provided by the donor countries but also indicated that the shortage of funds prevented Jordan from providing effective care to refugee communities.

He stressed on the need for additional grants to the health sector as part of Jordan’s response plan to target both host and refugee communities.

The minister also proposed the formation of a steering committee with members from relevant authorities and the funding agencies which will shift the focus from humanitarian response to long term planning for healthcare provision.

The ambassadors affirmed their support for the healthcare sector and discussed potential financing mechanisms that with clear strategies and measurements of success.

Fakhoury continued to say that refugee healthcare provision would take the forefront in the upcoming conference in Brussels on 24-25 April.

The conference “Supporting the Future of Syria and the Region” is the second of its kind and focuses on humanitarian support to Syrians, both inside Syria and in neighbouring countries, namely Jordan, Lebanon and Turkey.

In the beginning of Feb. the Jordanian government and international community endorsed the Jordan Response Platform to the Syria Crisis for the years 2018-2020 with total funding of $7.3 billion.

During the first five years of the conflict, the cost of hosting refugees in Jordan was estimated at $6.6 billion and in 2017 Jordan received $1.7 billion in grants which covered only 59 percent of the funds needed to finance refugees that year.