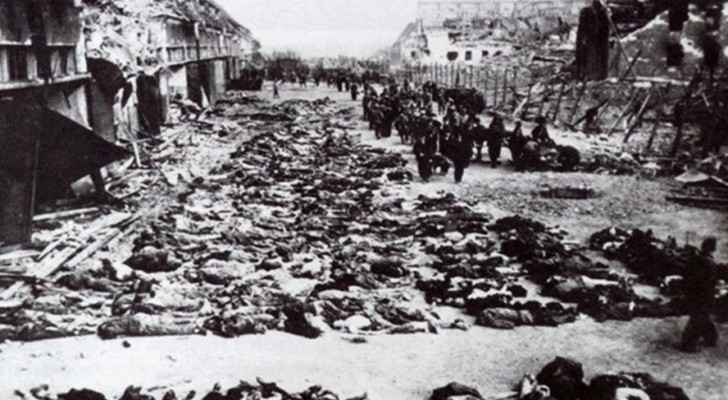 Palestinians are commemorating the 70th anniversary of the Deir Yassin Massacre on Monday, which took place on 9 April, 1948. Today, they are remembering the continuous Israeli massacres against Palestinians during the past seven decades, since establishing the so-called independent Israeli state.

During the Massacre, armed members of the zionist groups the Irgun and Lehi gangs attacked the Palestinian village of Deir Yassin in the Jerusalem district and murdered 254 civilians, including children, according to journalists who witnessed the massacre.

Some of the victims were mutilated and raped before being murdered. Around 25 men from the village were paraded through Jerusalem and then executed in a nearby quarry, while those who were able to escape fled to East Jerusalem and other villages.

Within a year of the massacre, Deir Yassin had been emptied of Palestinians and was inhabited by Jewish immigrants. Today, the Kfar Shaul Mental Health Center, an Israeli psychiatric hospital, sits in the village, after its establishment in 1951.

Deir Yassin was only the first of several massacres committed by Israel against Palestinians, including attacks on Nasir al-Din, Haifa, Yazur, Bayt Daras, al-Tantura, al-Lydd, al-Dawayima, Saliha, Qibya, Kufr Qasim, Shuja'iyya, al-Ibrahimi mosque, and al-Aqsa, until the most recent massacre of killing unarmed Palestinians during the Great Return March protests in Gaza this March.

Palestine Liberation Organization (PLO) Executive Committee Member Hanan Ashrawi released a statement on Monday calling for the protection of Palestinians and for holding Israel accountable for its violations, according to Wafa news agency.

“International condemnation is critical, but it is not enough,” Ashrawi said, demanding an international protest against Israeli violations of the international humanitarian law.

“Today, we honor the victims of Israel's systematic policies of destruction and massacres. A just peace for the Palestinians is long overdue. We call on the international community to join us in our mission to secure freedom, dignity and self-determination for the people of Palestine.” Images are taken from the Palestinian Information Center