Who ‘stole’ 100 deer from the Dibeen Forest Reserve?

Sambar Deer were introduced to Australia from India, Ceylon and Malaysia in the 1860s. (Thai National Parks) 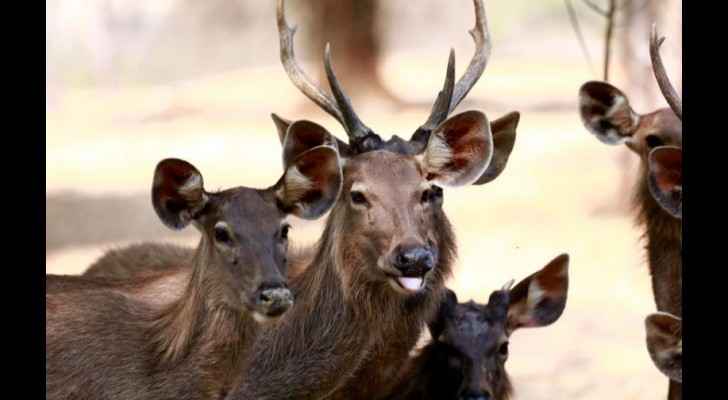 More than 100 deer are thought to have been stolen from the Dibeen Forest Reserve in Jerash last week, however, a source told Roya on Tuesday that the entire incident could be a simple misunderstanding.

The source pointed out that the person who received the order for the Philippine brown deer must have misread the number of animals being delivered, thinking that an extra 100 animals were on the list.

On the other hand, the source said that the supplier could have mistakenly thought that the reserve wanted 100 less deer than their original order.

Recent figures by the Jerash Agriculture Directorate showed a count of 350 deer, which reduced to 176 and then again to 162 in a short period of time.

The Directorate said that the “missing” deer are worth up to JD 50,000, adding that they were gifted to the reserve from Australia.

Game Management Authority describes the animal as “a very large deer,” and says that “a mature stag can stand 130cm at the shoulder and weigh up to 230kg. The hinds are smaller in size and stand up to 110cm and weigh up to 180kg.”

This breed is “uniform dark brown with ginger and cream under-parts. Their hair is very stiff and coarse. Their antlers have typically three points on each side (six-tined), are heavy and may reach lengths of greater than 30 inches.”

Sambar Deer were introduced to Australia from India, Ceylon and Malaysia in the 1860s.