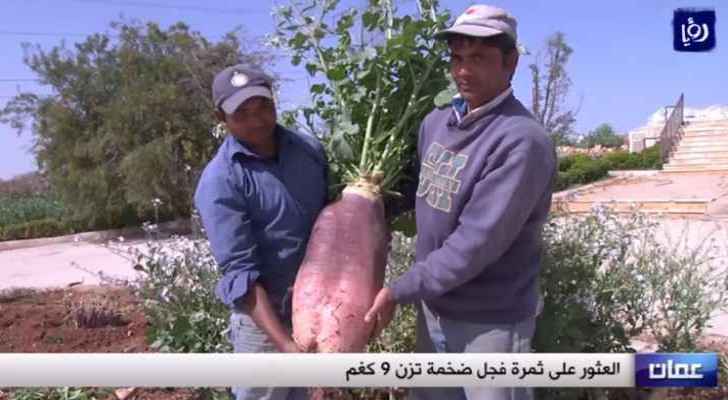 Jordanian farmers were mesmerized after picking a radish that weighed 9 kilograms and measured 60 cm long, without having any fertilizers or chemicals added to it.

The gigantic organic veggie was picked at a farm in Amman, but the seeds used to grow it came from another land.

Agricultural Engineer Amal Al Qeimari told Roya: “We have Bangladeshi farmers who bring white radish seeds with them from Bangladesh,” which are used along with other radish seeds in that specific farm.

She explained that this is a rare case of a genetic mutation, one that led the radish to grow this large.

A spring radish typically measures between 1.9 cm-3.17 cm in diameter when harvested. Winter radishes can grow up to 46 cm long.

According to the Guinness World Records website, the world’s heaviest radish was grown in February 2003 by Manabu Oono in Japan; it weighed 31.1 kg and had a circumference of 119 cm.

As for the health benefits of radishes, surprisingly, there are plenty:

You can watch the full "giant radish" report (from Roya Arabic) below.