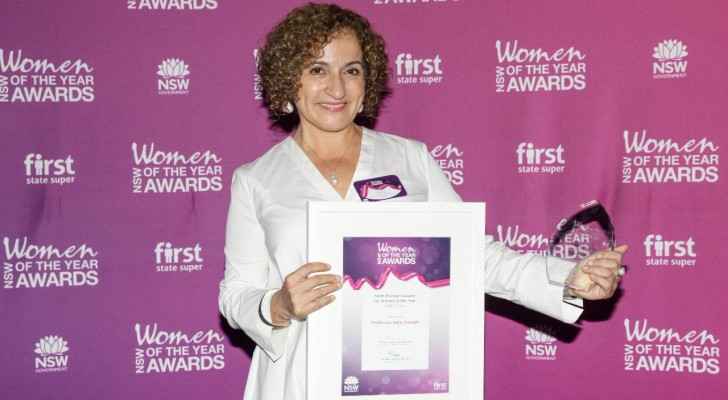 On the International Women’s Day, the Jordanian tissue engineer and Professor in Sydney University, Hala Zreiqat, was awarded the NSW Premier’s Award for Woman of the Year in Australia, Sydney University website wrote.

Zreiqat, was humbled by the award but appreciated the opportunity it would provide her to reach out and expand her interactions with young people around in regional remote areas in New South Wales.

The award is in its seventh year and it recognises and celebrates the outstanding contribution made by women across NSW to industry, community and society.

Professor Zreiqat graduated from Jordan University in 1982. Before leaving to the University of New South Wales in 1991 and pursuing her PhD in the School of Medical Sciences, Zreiqat held the position of Head of the Medical Laboratory at Queen Alia Heart Research Institute, King Hussein Medical Centre, Royal Medical Services and the Jordanian Armed Forces.

She has been in contact with Jordanian academic institutions and has helped in promoting Australian higher education by meeting with 24 presidents of Jordanian universities. She was also in the University of Sydney delegation to the Middle East in 2012 where she visited University of Jordan and Jordan University of Science and Technology.

In her CV she mentions initiating and organizing an international symposium in Jordan in 2008 to raise awareness of osteoarthritis and osteoporosis and their effect on women’s health in the Middle East.

Her ways of giving back to the community are not limited to higher education as in 2010 and 2011 she gave talks at Jordanian high schools, King’s Academy, and International Academy Amman, enlightening students about the benefits of medical research.

The pioneering biomaterials professor who has been described as a trailblazer for women in the biomaterials field, was internationally recognised for her contributions in regenerative medicine and translational orthopaedic research. She founded the University's Tissue Engineering and Biomaterials Research Unit in 2006 and became the first female president of the Australian and New Zealand Orthopaedic Research Society

Here is a video of her talking about her work in TEDx Sydney in 2014. She delves into topics such as synthetic bone substitutes, 3D printing, and personalized medicine.