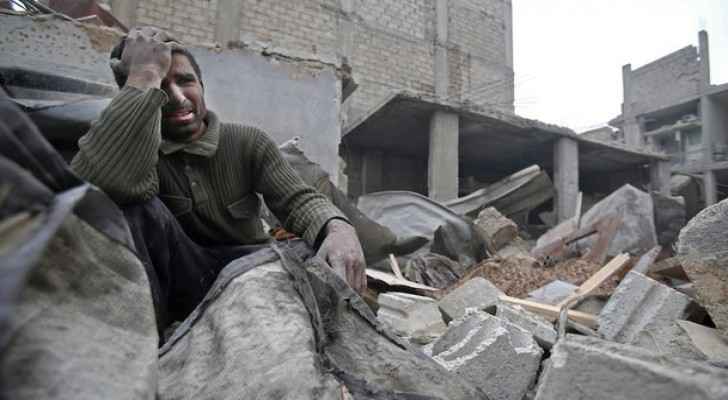 At least a child was killed and 20 people were injured on Sunday after Assad regime attacked Eastern Ghouta using chemical weapons on the town of Chifonieh to the east of the latest opposition-held area. Injuries brought to hospitals with symptoms indicating Chlorine use.

This comes as part of the continuous brutal attack launched by Assad regime on Eastern Ghouta in which more than 500 people were killed, 121 of them were children in the latest escalations began on Monday after Assad forces decided to intensify the offensive in an attempt to retake the last remaining opposition-held enclave.

Earlier on Saturday evening, the UN security council voted for a 30-day truce, drafted by Sweden and Kuwait , to allow the delivery of humanitarian aid and medical assistance as rescuers in Ghouta said bombing is preventing them from counting bodies during one of the bloodiest attacks on the seven-year Syrian war.

While the UN held Russia responsible for holding international humanitarian efforts to ease the suffering of civilians in the war-torn Syria, Russia did not want to specify when a truce would start, so a proposal for the truce to begin 72 hours after adoption was watered-down to demand it start “without delay.”

All parties were demanded to “engage immediately to ensure full and comprehensive implementation” in the truce.

However, warplanes continued strucking towns in Eastern Ghouta shortly after the UNSC vote.