Workers gathered in front of the GAM headquarters. (Roya) 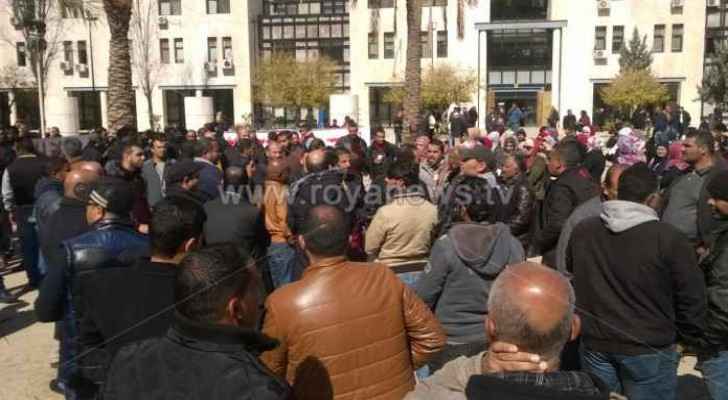 The workers demanded better job security in the form of annual and holiday leaves that will not warrant deductions or affect their salaries. They also appealed for a change in their job title when day-waged labourers became regular employees.

The strikers protested the JD 7 deduction to their pay for union membership as they are not in fact union members. They also demanded a 13th salary to be paid to workers each December.

Workers also voiced concerns of discrimination in the distribution of benefits and bonuses. They accused GAM of selectively allocating bonuses without providing proper justification.

The day-waged labour movement is not a new phenomenon in Jordan. In 2011 alone, Jordan Labor Watch, an initiative of the Amman-based Phenix Center for Economics and Informatics Studies, documented over 800 labor actions, compared to 140 protests in all of 2010. The majority of the protests were organized by day-waged labourers.

Prior to 2011, the organizers of meetings or protests were required to obtain a license; in March of that year, the law was amended so that they need only inform authorities of their plans. Here is a video for Roya TV from the strike: