Mulki recieves congratulations after the vote was rejected. (SocialMedia) 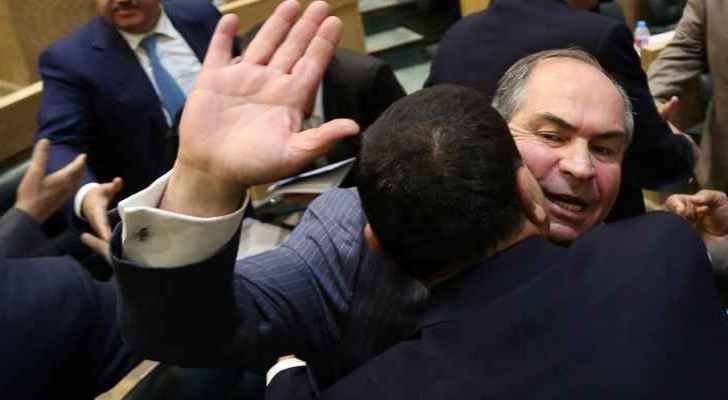 The government of Prime Minister Hani Mulki survived the parliamentary vote of no confidence that was filed by several MPs on Sunday in the Lower House.

The vote was opposed by 67 MPs, while 49 voted in favor and four abstained. There were 122 MPs attending the session in the Lower House out of a total of 130 MPs.

The session was presided by the Speaker of the House Atef Tarawneh, who did not cast a vote.

After the vote PM Mulki thanked the Parliament for renewing confidence in his government. He ensured MPs that the government will continue efforts to protect Jordan and its citizens. Mulki also ensured his legacy will not leave problems for upcoming years.

“I thank you all, whether you have voted in favor, opposed or abstained. I will remain open to all of you and we will work together for our country and its citizens under the Hashemite patronage”, the PM stated.

The memorandum that requested a no-confidence motion against the government was signed by 22 MPs. They cited the government lack of vision in addressing current challenges and imposing higher taxes on citizens as the main reasons for the request.

Even though Mulki dodged the vote of no-confidence trust has markedly decreased. When his government was given the vote of confidence 15 months ago only 15 MPs voted against. This time, more than three times the number showed lack of confidence in the government’s ability to implement reform.