during a demonstration in Turkey (Photo: OZAN KOSE/AFP/Getty Images) 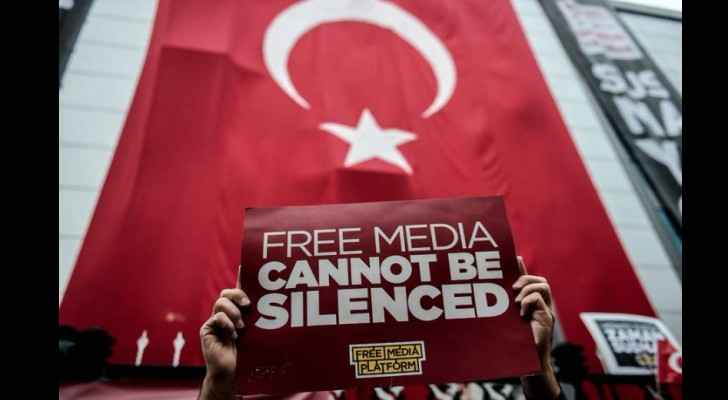 A Turkish court has sentenced six journalists to life in prison over allegations of involvement in a failed coup attempt on 15 July, 2016, reported Turkey’s state-run Anadolu news agency.

Following a months-long trial, the suspects were charged with planning to subvert the Turkish constitution and President Recep Tayyip Erdogan.

The agency said that those sentenced on Friday include Ahmet Altan, the former editor-in-chief of the liberal Taraf newspaper, his brother, journalist and academic Mehmet Altan, and prominent journalist Nazli Ilicak.

The journalists were accused of having ties with US-based Turkish preacher Fethullah Gulen, whom Turkey considers the mastermind behind the failed coup. They were also accused of being members of a terror organization and of “sending ‘subliminal messages’ via TV appearances and newspaper columns urging the overthrow of the government,” according to The Guardian.

Three other defendants were also sentenced to life for trying to overthrow the government and abolish the constitution.

The International Press Institute said it was “appalled” by the verdict, while Sarah Clarke, the policy and advocacy manager for the writers’ association PEN International, urged the European Court of Human Rights to interfere.

Today's verdict & sentences of life without parole for #AhmetAltan, #MehmetAltan & #NazliIlicak mark an apex of the disintegration of the #Ruleoflaw in #Turkey. Judge ignored a binding Turkish Constitutional Court decision. The European Court of Human Rights #ECtHR must act. pic.twitter.com/mH0njuskpu