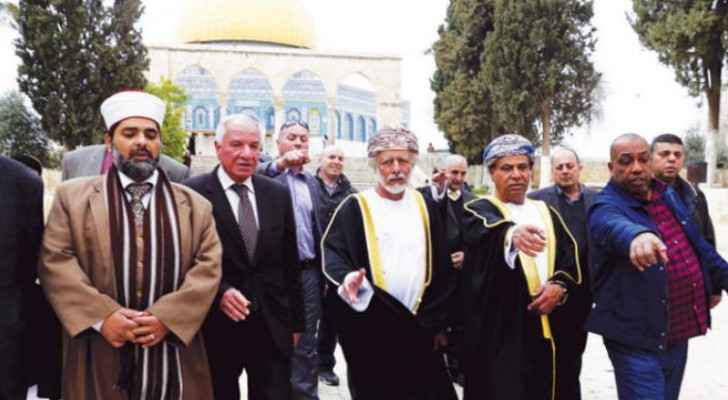 Bin Alawi visited the city of Ramallah, before heading to Al Aqsa Mosque in Jerusalem on Thursday, responding to an invitation from Palestinian President Mahmoud Abbas, reported Asharq Al-Awsat newspaper.

There, he was welcomed by the director of Islamic Waqf in Jerusalem, Sheikh Azzam al-Khatib, director of Al-Aqsa Mosque, Sheikh Omar Al-Kiswani, and Abdullah Siam, the Deputy Governor of Jerusalem.

“This is a historic visit in support of the people of Jerusalem and Al-Aqsa Mosque,” al-Khatib said.

Bin Alawi is the first Arab official to visit Jerusalem since U.S. President Donald Trump announced his intention to move the US embassy from Tel Aviv to Jerusalem, and to recognize the city as Israel's capital earlier in December.

In Jerusalem, Bin Alawai met with President Abbas, and said that establishing a Palestinian State will bring stability and development to the region.

“We have to encourage Arabs everywhere to come to Palestine because, as I said, hearing is not the same as seeing. What is needed now is for them to see the Palestinians,” the Omani foreign minister said.

“It is not possible to achieve what the world wants - stability and development and building a culture of tolerance - except by the establishment of the Palestinian State,” he added.

“This is an affirmation that the Palestinian people are not alone, and that all the Arab peoples are behind them,” he said, calling upon Arab countries to respond to Abbas’ invitation.

Oman neither recognizes Israel as a state, nor does it have any diplomatic ties with it.

Visiting Palestine usually requires prior coordination with Israel, Jordan, and the Palestinian Authority, especially if the visit is made through the Allenby Bridge connecting Jordan with Palestine, which has an Israeli checkpoint as well.

However, an Israeli foreign ministry spokesman said he was “unaware of the visit and could not immediately comment,” according to The Times of Israel.