US Embassy in Jordan is set for important announcement

Rex Tillerson arrived to Jordan as part of his five-country regional tour. (USEmbassyJordan) 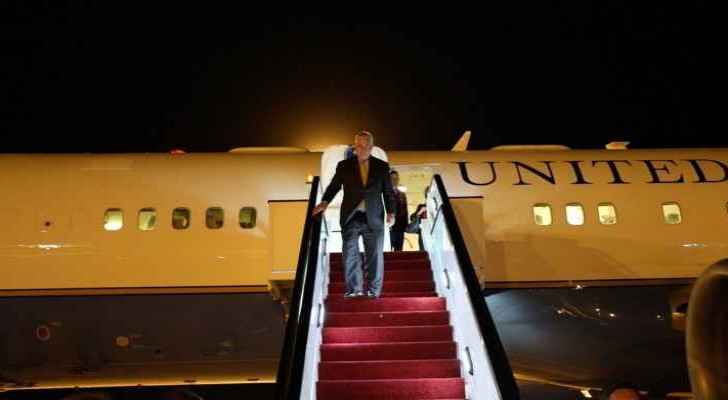 The US Embassy in Jordan welcomed the US Secretary of State Rex Tillerson upon his arrival in Amman late on Tuesday.

On their Facebook page, the Embassy posted a video of Tillerson getting off the plane in Amman, with the caption: “Welcome to Jordan Secretary of State Rex Tillerson!”. The Embassy prompted viewers to follow up the following day as an “important announcement” would be made.

In a statement on the Embassy’s official website, the US pledged $6.5 billion in assistance to Jordan over the next five years. The two countries will sign a Memorandum of Understanding (MoU) on Wednesday as 2018 marks seven decades of friendship and partnership.

Since 1951, the US has provided Jordan with more than $20 billion in assistance, benefiting the kingdom in terms of security, economy, health care as well as education and water. The US confirmed their commitment to prosperity and security in Jordan.

Tillerson will hold talks with King Abdullah II and his counterpart Foreign Minister Ayman Safadi to discuss key topics including the crisis in Syria and Jordan’s support for Middle East peace, according to a statement released by the US Embassy.

“[He] will underscore the enduring strength of the US-Jordan relationship, engage with the Jordanian leadership on the conclusion of a new memorandum of understanding on bilateral assistance, and discuss key regional issues such as the ongoing crisis in Syria and Jordan’s support for Middle East peace,” the statement reads.

Jordan is the third country in Rex Tillerson’s visit is the region. The tour started with Egypt and was followed by Kuwait. The Secretary will be heading to Lebanon and Turkey on Thursday.