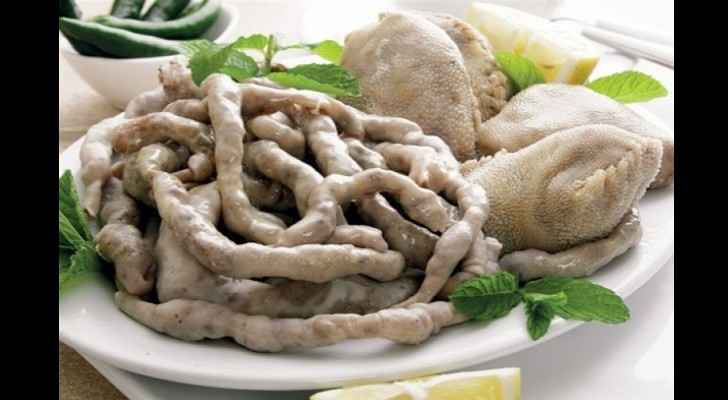 If you’ve grown up around Arabic food from the Levant region, you will be familiar with all the ingredients that go into making popular dishes like tabbouleh, kibbeh, hummus, makloubeh, shawerma and others.

Middle Eastern cuisine has a lot to offer, so it comes as no surprise that it has gained world popularity over the past decade.

But for someone who has never tried this cuisine before, some dishes will not only look foreign to them, but they might seem inedible too.

Here are 5 Arabic dishes that might look unappetizing to a non-Arab person, until they’ve actually tasted them. Those who have only seen but never eaten Mloukhieh will often refer to it as a “green, slimy soup.” We must admit, it doesn’t look all that appealing, but once you’ve had it with some rice, chicken (or lamb) and lemon squeezed on top, you will be green with envy that you haven’t been eating it your entire life.

What is it: Mloukhieh is the leaves of a species of shrub called Corchorus olitorius, and it is used as a vegetable. At first sight, the texture and colour of this dish might not put you off, but the strong smell of cooked hard dry yoghurt, aka Jameed, certainly might. Jameed has a distinctive, salty taste, but it can’t be resisted when combined with some rice, thin bread, tender lamb chunks, and pine nuts and almonds sprinkled all over it.

What is it: Jameed is made out of goat or ewe’s milk. The milk is kept in a fine woven cheesecloth (and regularly salted) for days until it makes a thick yoghurt. Fawaregh are similar to the traditional Scottish dish Haggis. They look like sausages, except they’re sheep intestines stuffed with rice and minced meat. They look like, well, a sheep’s insides, and they often smell like it too. However, many people swear that they taste delicious.

What is it: Fawaregh are a Middle Eastern delicacy. Some people also stuff the sheep’s stomach, and eat its brain, heart and other internal organs. Funnily enough, Makhbousa translates into “mashed up in a messy way,” which is pretty much how this dish looks. So it’s OK if you don’t find this lentil-based recipe attractive, but we assure you that once you’ve dipped some bread in it, the flavours you’ll taste in your mouth won’t leave you disappointed.

What is it: Lentils come in different shapes and colours, but brown lentils are specifically used to make Makhbousa, which has a thick, creamy texture and is best enjoyed by dipping bread in it, with a green salad on the side. This purple-reddish dish is made out of plenty of chopped onions mixed with sumac (which gives the dish its distinctive colour), which are placed on top of a piece of flatbread that’s been soaked in olive oil, before pieces of chicken go on top, and voila, you have yourself some Msakhan.

What is it: Sumac is a tangy, lemony spice which comes from the sumac bush. The deep red berries the bush produces are dried and ground into coarse powder, and are used in numerous dishes.

United Nations envoy in the Middle ....