For first time since 2014: Syrians hold prayers in church in Deir al-Zour

Dozens of people gathered to hold the prayer for their first time since 2014. (AFP) 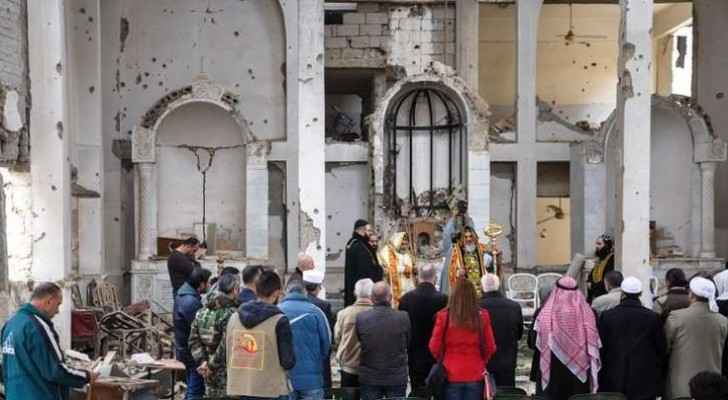 Syrian Christians on Saturday held their first mass since 2014 in a ravaged church in Deir al-Zour, one of the former ISIS strongholds in eastern Syria.

In St. Mary's Church in Deir al-Zour, dozens of Christians gathered to hold the prayer that was led by the Syrian Orthodox Patriarch of Antioch Ignatius Aphrem II and also attended by some Muslim clerics.

"It's an indescribable feeling for us to pray in a nearly-destroyed church, which serves as a consolation for our hearts and a message of hope to the people of the city to come back and take part in building it anew," the patriarch told the AFP.

While signs of damage are still shown from the war, with blown open windows and remnants of rockets covered the floor, prayers were held in the church for the first time since 2014 when ISIS forces gained control over the city.

"Prayer for me is like a new life," Sally Qasar told AFP. "It gave me the determination to come back to Deir al-Zour and put up with the poor provision of services, and participate in rebuilding it."

Deir al-Zour remained a stronghold for ISIS since 2014 until freed in November 2017. It was important because of its proximity to the border with Iraq.

Before Syria’s uprising in 2011, an estimated 3,000 Christians lived in Deir Ezzor, however, around 350,000 of its residents were forced to flee their homes during weeks of fighting.