PA releases local activist after protesting against US delegation in Bethlehem

Activists broke out the hall and clashed with Palestinian officials. 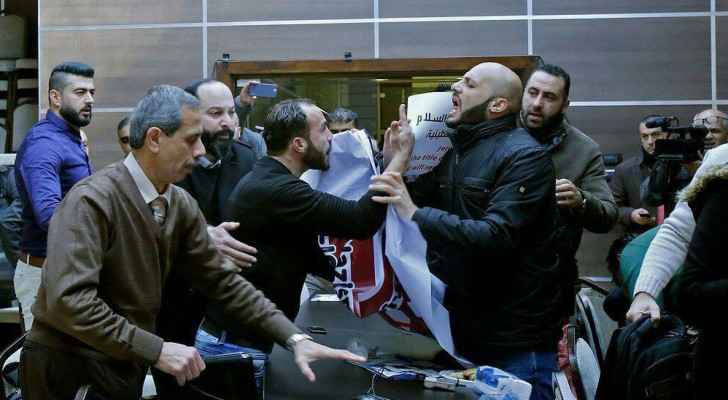 Palestinian Authority (PA) security forces released Palestinian activist after he was arrested for involvement in protests against US delegation in Bethlehem on Tuesday.

Three other activists were summoned alongside Lutfi. They were identified as Anas Abu Srour, Ahmad Odeh, Ibrahim Msallam.

PA forces summoned them for interrogation with PA special security in Bethlehem. A fourth activist was also summoned, though his identity remained unknown.

Residents of Aida camp and the surrounding areas went to streets heading to the PA headquarters in Bethlehem, demanding the release of Lutfi.

Lutfi was released after signing documents saying they would appear for interrogation on Wednesday, Ma’an News said.

Earlier on Tuesday, Lutfi and other Palestinian activists broke into the Chamber of Commerce and Industry in Bethlehem. They succeeded in kicking out the US State Department delegation and closing the office of the Chamber.

The US delegation was meeting with Palestinian officials.

Protesters demanded the dismissal of Bethlehem Chamber of Commerce and Industry’s Chairman, Samir Hazboun, as he did not comply to the national consensus, and did not respect all national decisions to boycott meeting with US delegations, the Palestinian News Network reported.