Beebos has been dubbed 'the most famous cat in Jordan.' (Facebook) 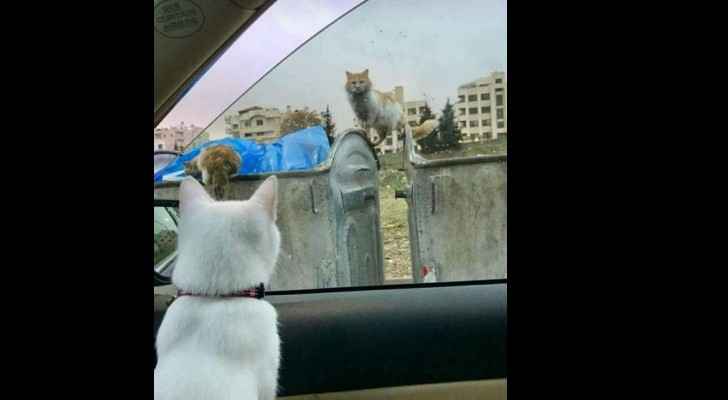 A “posh” kitty has been dubbed “the most famous cat in Jordan” after a brief encounter with a street cat. This picture-turned-meme shows “Beebos the cat” staring at a street cat sitting on top of a garbage bin, while the latter hopelessly thinks to herself:

“Sigh! You’re a member of the bourgeoisie now, while we remain the proletariat.”

Beebos’ owner, Hussein Al Maharmeh, took the viral photo in the affluent district of Abdoun in Amman last Tuesday, while taking his pet for a ride in his family car, his father, Mohammad, told Khaberni news.

According to Mohammad’s calculations, the picture has been viewed more than 49 million times on social media.

The famous feline is so popular that it has been approached by some companies to advertise their products, and by TV stations wishing to interview her, Mohammad said.

Last November, the British Embassy in Amman made headlines locally and internationally after appointing Lawrence of Abdoun as their, and the country’s, first diplocat.

Many people were especially excited to follow the black-and-white furball on social media for more pictures and videos of him in action.

Maybe Lawrence can have Beebos over for some afternoon tea?