Why Jordanians are mocking the armed bank robbery and wishing the robber ‘good luck’?

An image from outside the Societe Generale Bank Jordan in Al Wehdat area after the incident. (Roya) 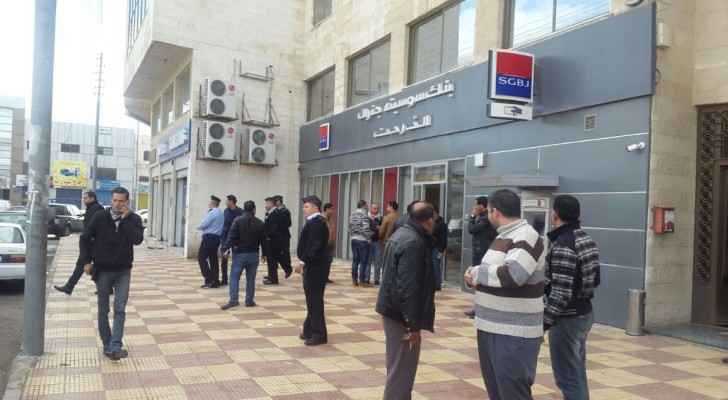 Following the armed robbery of Societe Generale Bank in Al Wehdat, Amman, on Wednesday morning, Jordanians were divided between those who supported the robber, and those who denounced his action.

An investigation into the robbery is still ongoing, the Jordanian Public Security spokesman, Amer Sartawi, confirmed to Petra News Agency.

Sartawi said that while monitoring Jordanians’ reactions to the robbery on social media, he found it “unfortunate” to see those who were praising him for his actions.

He confirmed that the government is keeping an eye on similar messages of support, and warned that action will be taken against those who write them.

Sartawi urged people to allow security police officers to do their jobs, in order to continue with their investigation and uncover the crime’s details.

Because many Jordanians believe that the crime is an indicator of a heavily deteriorating economy, they continued to mock the incident on social media, with some asking God to bless the robber and others encouraging such behaviour, in an attempt to deliver a message to the government about the suffering of Jordanian people.

Here are some of the tweets shared using the trending hashtag #سطو_الوحدات #AlWehdatRobbery:

The options currently faced by the government:
A) appointing Batman
B) realizing that there’s a correlation between crime rate and irrational price hikes#حكومة_الملقي #سطو_الوحدات

Translation: Each Jordanian will go into the bank will be asked: How we can help you? Robbery or withdrawal?

On the other hand, many others denounced such crime, wondering about reasons behind such incident that is the second of its type in a week:

Translation: Jordanians' sympathy with robbery incidents 'even it was saracastic' it indicates how people are pressured in our time. (May God protect us from what is coming).

Translation: If you all imagine yourself in such situation [robbered], you won't be encouraging them, as if it was acceptable.

Some people were excusing the robber, blaming the government of such crimes:

However, others went to compare the robbery incident with the number plates auction that took place today in Amman, where a wealthy man won the highest bid on the unique number plate “77-7” for 450,000 JOD:

Translation: Imagine there are two robbery incidents happeneing in the same day in Amman, and meanwhile, there is a bussinesman buying number plate by around half a million.
This needs re-thinking all decision of "people who are sitting on their desks holding a cigar and their driver is in his car waiting for them" and they think of themselves controlling the country and understands everything going on in it.

Translation: Here are half a million [talking to PM Hani Mulki]. There is no need to increase taxes.

Recently, the government announced a new set of prices and taxes to start taking effect on Wednesday morning, leading Jordanians to criticize this decision, which many people believe will further increase their living expenses, and in some cases, will not allow some families from affording their daily basic needs.

The new imposed taxes target basic commodities, including bread and fuel, which in turn will increase the prices of transportation, cigarettes and foodstuffs.