The demolition of a house in the village of Yatta, Hebron in 2016 by Israeli soldiers (Al Arabiya) 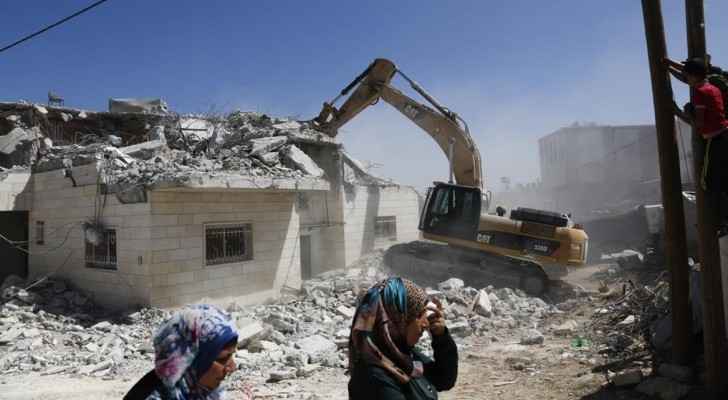 Eviction and demolition notices were distributed on Monday among Palestinians in the village of Khillat al-Nakhla in Bethlehem, Middle East Monitor (MEE) reported citing Felesteen.ps.

According to Hassan Brijea, an anti-settlement activist in the West Bank, the Israeli soldiers raided the village and handed over the notices, which claim that the area is classified as a state land.

Brijea said the Jubran family were ordered to evacuate their 45-donum land, while Mohamed Ayesh was ordered to stop working on a water well in his farm along with an order to demolish what he constructed under the pretext of having no building permit, MEE wrote.

Ayesh had earlier got a ruling by an Israeli court which proves he owns the land, after Israeli settlers reportedly attempted to steal it several times.

Palestinians in the West Bank are forced to build their houses without a permit, because the Israeli municipality rarely issues them to allow the “legal” construction of their homes.

The procedures to apply for Israeli-issued building permits are lengthy, sometimes lasting for several years.

The application costs could reach up to 300,000 shekels ($79,180), according to the Applied Research Institute - Jerusalem (ARIJ).

Palestinian women walk by the family house of Khaled Mahamra after it was demolished by Israeli troops in the West Bank village of Yatta, south of Hebron, Thursday, August 4, 2016