Pence arrives in Amman amid protests outside US Embassy

Pence arrived in Jordan accompanied with his wife. (Petra) 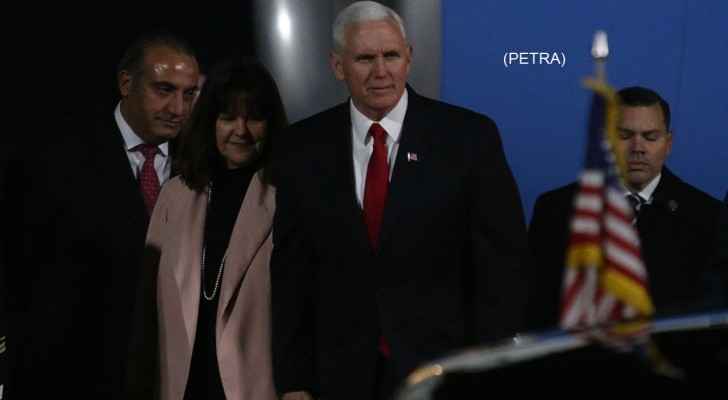 Pence was welcomed in Amman’s Civil Airport by the Mayor of Amman, Amman’s governor, as well as the US Embassy’s Chargé d'Affaires and several Jordanian officials.

He is scheduled to meet King Abdullah II on Sunday, as part of his Middle East tour, kicked off on Saturday in Egypt, where he met the President, Abdel Fattah Sisi, before heading to Jordan.

On the other hand, around 70 Jordanians gathered on Saturday night outside the US embassy in Amman to protest against the visit of Mike Pence, the Jordan Times reported.

The protest aims to deliver a message to the US official that “he is not welcome to Jordan”.

During his short visit to Egypt, Pence confirmed to Sisi that the US would support a two-state solution for Israelis and Palestinians if the two sides agreed, seeking to reassure a key Arab ally over Trump’s Jerusalem decision, Reuters reported.

“We heard President Sisi out,” Pence told reporters after their meeting, confirming Sisi described his objection to Trump’s decision as a “disagreement between friends”.

Pence assured to Sisi that his country is committed to preserving the status quo of holy sites in Jerusalem and had come to no final resolution on boundaries for the two parties.

“[Sisi] noted that a solution for the Palestinian-Israeli conflict will only come through negotiations based on a two-state solution, and Egypt would spare no effort to support this,” the Egyptian presidency said in a statement.

“We stand shoulder to shoulder with you in Egypt in the fight against terrorism,” Pence told Sisi.

Pence to head to Israel after finalizing his visit to Jordan, where he is not scheduled to meet Palestinian leaders.

This visit was scheduled earlier in December, but it was postponed following Palestinian officials refusal to meet him. A senior Fatah official Jibril Rjoub said that Pence was "unwelcomed" in Palestine, following Trump’s Jerusalem decision.