Video: US activist slams Trump by projecting the word 'Shithole' on Trump hotel 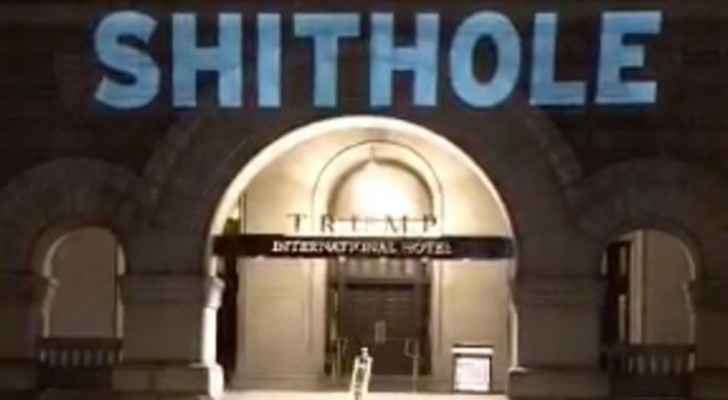 Following Trump’s controversial remarks when he described some countries ‘Shithole’ countries, several activists and protesters rebuked him, describing it as ‘shocking’ and discriminatory.

As part of the protests, the US activist and artist, Robin Bell, projected the word ‘SHITHOLE’ along with the poo emoji and other slogans on the Trump International Hotel in Washington, DC.

He also projected: "Pay Trump bribes here", and "This is not normal" on the hotel.

Earlier on Friday, Trump attacked US lawmakers for suggesting that US should protect immigrants from countries like Haiti, El Salvador and other African countries, but he went to say: “Why are we having all these people from shithole countries come here?”

Media sources said a Minority Senate was explaining to Trump a proposal to end the visa lottery in exchange for Temporary Protected Status (TPS) for countries such as El Salvador, and he was mentioning a list countries to be covered.

When he got to Haiti, Trump asked him: “why the US wants more people from Haiti and African countries?”.

Trump added the US should get more people from countries like Norway.

He also suggested the US would open doors to more immigrants from Asian countries as they might help the United States economically.

"The [President's] comments are unkind, divisive, elitist, and fly in the face of our nation's values," Republican Mia Love, whose parents came to the US from Haiti, said in a statement. "This behavior is unacceptable from the leader of our nation." Demanding an apology from the President.

The Republican, Cedric L. Richmond, a Chairman of the Congressional Black Caucus, said on Twitter that Trump’s remarks “are further proof that his Make America Great Again Agenda is really a Make America White Again agenda.”

Read More: Trump: Why US allows people to come from 'shithole' countries?