Will rapists who married their victims pre-abolishing Article 308 escape punishment by the law?

Women activists and civil society groups protesting against the law before scrapping it. (Archive) 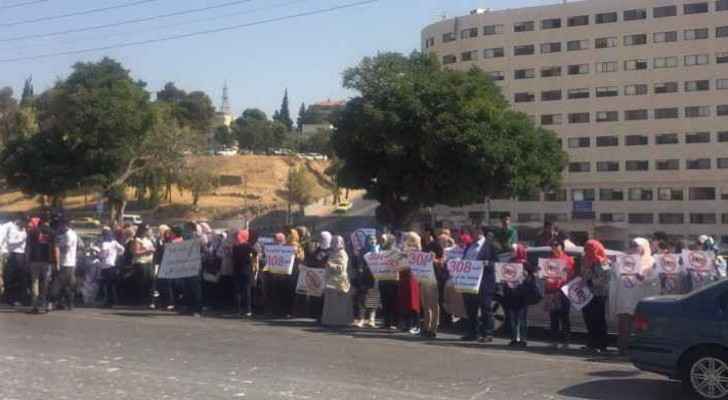 The Jordanian Supreme Court announced on Sunday that they will no longer be pursuing a man who has been detained in police custody for sexually molesting an 18-year-old girl, as he concluded his marriage contract with his victim before Article 308 was abolished.

The suspect married his victim in accordance with Article 308 of the Penal Code, which allowed rapists to be pardoned if they married their victim and remained married for at least three to five years. The law was scrapped in August 2017.

The Grand Criminal Court announced the suspension claiming that the case took place in 2016, before abolishing Article 308, and according to the old law, the suspect did not commit a crime because he married his victim.

However, the General Prosecutor in the court appealed the decision, calling for the offender's punishment, who is accused of raping the victim.

The controversial Article 308 allowed hundreds of sexual assault perpetrators to escape punishment by marrying their victims, in order to save the woman's honor and the honor of her family. However, this put victims at an even greater risk of abuse.

In August 2017, Jordan’s Parliament approved the abolishment of the article. Many hailed the vote as a victory for women's and children's rights.

Reports of women rights’ organizations in Jordan showed that many victims as young as 15-years-old were forced to marry their rapists, after being pressured by their family and their rapist.

According to statistics from Jordan's Ministry of Justice, 159 rapists avoided punishment by marrying their victims between 2010-2013, with over 300 rapes recorded annually on average during the same period.

Abolishing Artile 308 was a victory for Jordanian women's rights, following years of campaigning against the law.

Article 308's abolishment was part of a regional movement towards cancelling provisions that create impunity for perpetrators of sexual assault, following Tunisia, Bahrain, Morocco and Egypt, who scrapped similar laws, with Lebanon headed in the same direction.

Opinion: A misguided fight against ....