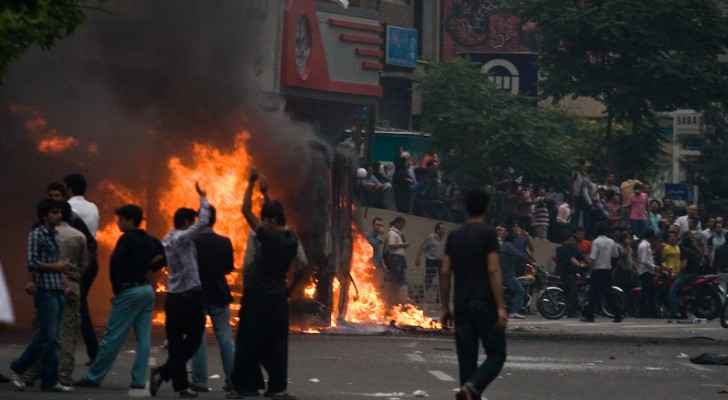 At least 12 people have been killed until Monday morning in Iran amid anti-government protests, according to the state television.

"In the events of last night, unfortunately a total of about 10 people were killed in several cities," it said.

"Some armed protesters tried to take over some police stations and military bases but faced serious resistance from security forces.”

In the most serious anti-government protests in Iran since 2009, Iranians are taking to the streets protesting economic conditions and new governmental policies since Thursday.

Earlier on Sunday, Iranian authorities have blocked Instagram and the messaging app Telegram from working in the country “in line with maintaining peace and security of the citizens”, the Iranian TV State reported quoting an anonymous source.

Iran warned that protesters will "pay the price" after a third night of unrest which saw mass demonstrations across the country, AFP reported.

Protesters shared videos on social media showing thousands protesting across the country overnight in the largest demonstrations in the Islamic Republic since 2009.

On the other hand, US administration showed support for the protesters condemning unrest and clashes ignited among protesters and security officers.
Trump on Sunday tweeted supporting the Iranian protesters, for the second time, saying:

“Big protests in Iran. The people are finally getting wise as to how their money and wealth is being stolen and squandered on terrorism. Looks like they will not take it any longer. The USA is watching very closely for human rights violations!”

Earlier on Saturday, he tweeted:

“The entire world understands that the good people of Iran want change, and, other than the vast military power of the United States, that Iran’s people are what their leaders fear the most…”

Which angered the Iranian government, leading the Foreign Ministry spokesman to say: “Iranian people give no credit to the deceitful and opportunist remarks of U.S. officials or Mr. Trump”.