The fact sheet released in the 352 magazine's edition. (Aliza Bin-Twitter) 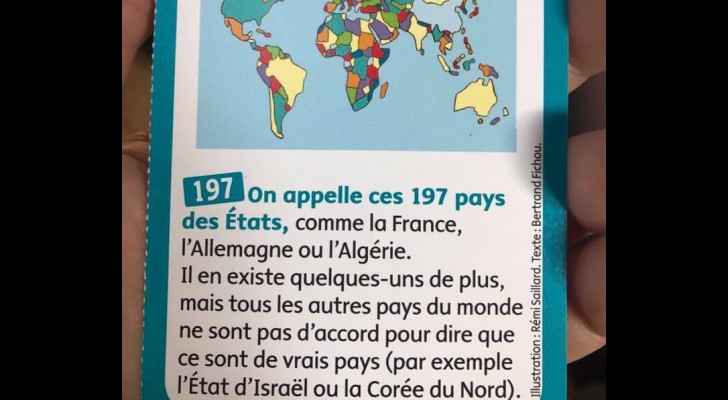 The French children’s magazine ‘Youpi’ announced on Tuesday the withdrawal of the 352 edition from newsstands, after describing Israel as a state that does not exist for real “with disputed legitimacy” in their December/January release, the AFP reported.

The magazine’s latest edition featured a fact sheet, saying "we call these 197 countries 'states', like France, Germany, or Algeria. There a few more, but not all other countries in the world agree that these are real states for example Israel or North Korea."

Criticism sparked over the magazine’s publication, resulted in apologizing to “all those who may have been hurt”, adding that it would remove the edition from sale, responding to the request of Francis Kalifat, the president-elect of the Conseil Représentatif des Institutions Juives de France (CRIF), the umbrella organization for Jewish organisations in France.

“We don't want to dismiss the existence of Israel … We wanted to express our good intentions. It is essential to help in spreading peace and calm”, the Chairman of Bayer group, the magazine’s publisher told AFP.

The Israeli Ambassador to France, Aliza Bin, also slammed the French magazine over its publication, saying: "Shocked by this lie taught to children. Such rhetoric can only encourage anti-Zionism, inseparable from anti-Semitism”.

It is worth pointing to that France is one of the countries that supports the two-state solution to resolve the Israeli-Palestinian conflict, also it supported a draft resolution in the UN Security Council to dismiss Trump’s decision to declare Jerusalem as the capital of Israel.