The US Ambassador to the UN Security Council, Nikki Haley voting against draft resolution on Jerusalem. 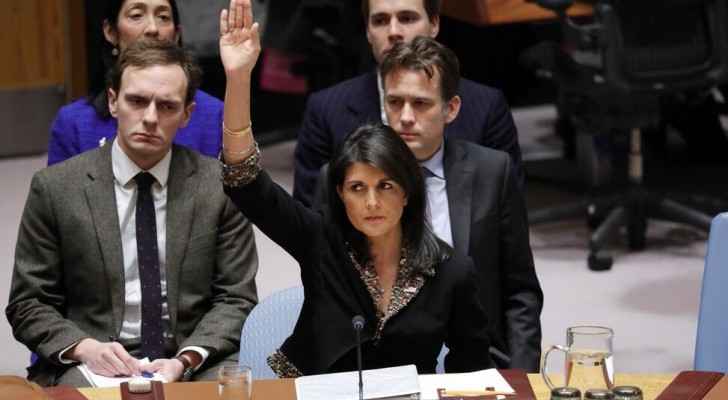 The General Assembly of the United Nations is scheduled to have an emergency meeting on Thursday to vote on a draft resolution which would cause the US to reverse its move following its veto of the resolution.

The US Ambassador to the UN Security Council, Nikki Haley, has threatened any countries who are thinking of backing the draft resolution, which was issued by Turkey and Yemen to dismiss Trump’s Jerusalem decision.

In a letter seen by AFP, Haley said that Trump will be watching the vote “carefully,” in addition to requesting Haley to report back to him on the countries who vote against the US. The urgent meeting on Thursday will come upon the request of Turkey and Yemen, on behalf of the Arab countries and the Organization of the Islamic Cooperation (OIC).

President of the General Assembly, Miroslav Lajčák, informed the delegations of all 193 countries in the world about the meeting in a letter he sent out late Monday night.

Riyad Mansour, the Permanent Observer of Palestine to the United Nations, expects the meeting to be met with a great deal of support and said that this issue "must be resolved through negotiations" between Palestine and Israel.

Earlier this week, the US vetoed a UN Security Council draft resolution that called for the rescinding of President Trump's decision of relocating the US Embassy from Tel Aviv to Jerusalem. Egypt issued the previous draft resolution that was backed by 14 member states in the Security Council, including key US allies like Britain, France, Italy, Japan and Ukraine.