US expects the Western Wall in Jerusalem to be part of Israel: officials

US-Israeli flags illuminated on Jerusalem walls ahead of Trump's deicision. 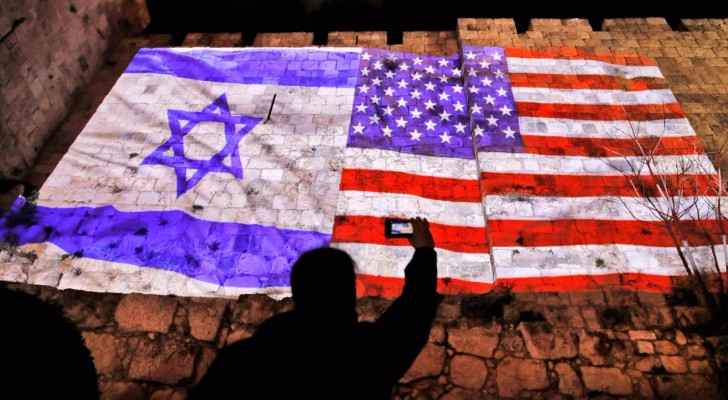 In another promise from the US administration to Israel, a senior Trump administration official said that his country expects the Western Wall in Jerusalem’s Old City as part of Israel.

The official’s remarks came ahead of Trump’s Vice President Mike Pence expected visit the region during the coming week.

"I think we can’t envision a scenario under which the Western Wall would not be part of Israel," he said. "But as the president said, the specific boundaries of sovereignty of Israel are going to be part of the final status agreement."

The Western Wall in East Jerusalem was seized by Israel in 1967 war, and it is an ancient limestone wall in the Old City of Jerusalem.

It has a significant importance for both Muslims and Jews. As for Muslims, it is the site where Prophet Muhammad tied his steed, al-Buraq, on his night journey to Jerusalem before ascending to paradise, and constitutes the Western border of al-Haram al-Sharif.

And for Jews, the wall is considered holy due to its connection to the Temple Mount, where Jews are permitted to pray.

While tensions at their highest between Palestine and Israel, following Trump’s decision earlier this month to recognize Jerusalem as the Israeli capital, the official confirmed that Palestinians should “digest what has happened”.

“Once they review the president's remarks clearly, they will realize that nothing has changed in terms of being able to reach an historic peace agreement. So, we think that the Egyptians and others, of course, can encourage them, but this visit may not be the right time to stress any kind of pressure from either side,” he said.

Trump’s decision had driven Palestinians to demonstrate daily in each city of the country to protest the decision and to put more pressure on the international community to convince Trump to back his decision.

Protests resulted in at least 10 deaths and thousands injured until the moment.