IN PHOTOS: Protests kick off across Jordan against Trump decision

In front of the Omari mosque in Karak. (Roya) 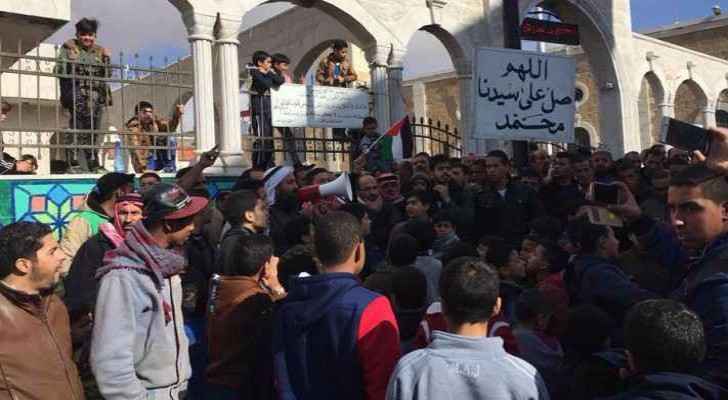 Provinces throughout Jordan have witnessed sit-ins and solidarity marches with Palestine, in protest of U.S. President Trump’s recent decision to recognise Jerusalem as the capital of Israel.

Mass rallies took place in various Jordanian cities, with protesters waving Jordanian and Palestinian flags, stressing that Jordan is the country that is officially and popularly closest to Palestine.

In Karak, protesters marched from Umayyad mosque, calling for Arabs to stand by the Palestinian people and reiterating that Jerusalem is the eternal capital of Palestine. Meanwhile in Irbid, crowds angrily denounced the U.S. decision and saluted the steadfastness of the Palestinians in their fight against the Israeli occupation. Protests are also taking place in downtown Amman and at the U.S. embassy in Amman’s Abdoun.

Trump’s announcement proclaiming the US decision and preparations to move the US embassy from Tel Aviv to Jerusalem sparked anger across the region, with protests against the decision taking place in Palestine and across the Middle East.