How long until Jordanian women can pass their nationality onto their children? 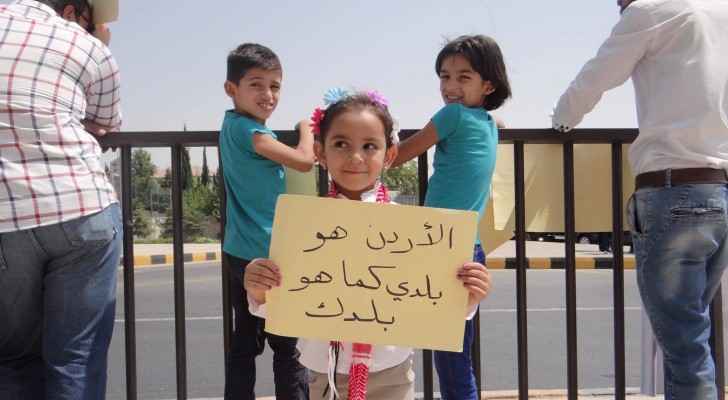 This year saw several major events dealing with women’s issues, including the #MeToo movement that denounced sexual harassment. The movement spread across the world, including Jordan, where women’s rights activists are continuing to persevere in their fight to provide Jordanian women with all of their rights.

One of the major issues in the fight for gender equality is Jordan’s nationality law, which does not allow Jordanian mothers to pass their nationality on to their children.

Dema is a Jordanian woman with a six months old child. The child’s father is from Iraq, meaning her baby cannot be registered as a Jordanian national. “What I am most afraid of is if the society looks at my kid as a foreigner, or if he feel not as secure and safe as Jordanians, even though he was born and will be raised here,” she told Roya.

A lot of Arab countries have already taken the lead in amending the law and allowing women to give their nationalities to their children, including Algeria, Egypt, Morocco, Tunisia, and Yemen. So will Jordan follow in their footsteps and let Jordanian women pass on their nationality?

-- Is it important for women to pass on their nationality? --

The organizer of “My mother is Jordanian and her nationality is a right for me”, Rami ِAlwakeel told Roya that he thinks it is important for Jordanian women’s children to get the Jordanian nationality, so it can make their lives easier.

“In November 2014, the government announced what rights they will have, however Jordanian women’s children are still treated like foreigners when it comes to property rights, obtaining a driving license, and also when it comes to investing in Jordan,” Alwakeel said.

Mohammed Shamma, a journalist at Journalist for Human Rights (JHR), agrees with Alwakeel. He told Roya that Jordanian women should have this right for a simple reason: Equality.

“The Jordanian Constitution states that all Jordanians are equal despite their gender, religion, and any other differences,” adding that “the government should act accordingly with the Constitution and laws,” Shamma noted

While the politician and lawyer, Mahmoud Kharabsheh said that he is not with or against this right he just with the Jordanian law.

Kharabsheh told Roya that “according to the fifth article in the Jordanian Constitution Jordanian nationality is determined by law, and in our law Jordanian women can’t give their children their nationality.”

-- The identification documents issued by the Civil Status and Passports Department --

The Civil Status and Passports Department issued in 2016 an identification card for Jordanian women’s children that will provide them with certain privileges.

Women’s rights activist like ِAlwakeel thinks this card is not very helpful for those children in their everyday life activities, he said “the card is not valid in banks or when the police ask for personal identification and they show them the document they ask for another document like a passport”

Others like Shamma think that this card is not enough and the government should do more than that, he commented on the insufficient steps that the government takes by saying: “the identification card is not the solution for the problem, what Jordanian women’s children need is to be treated equally, have their mother’s nationality and their rights as Jordanian.”

However Kharabsheh commented on this, saying that given the current socio-economic situation in Jordan, an identification card should be considered generous. “Despite the fact that Jordan is suffering from poverty and unemployment, we offered our kids that are from a Jordanian mother the identification card,” he told Roya.

He added that the only rights they do not have is their political rights, which require Jordanian nationality. “This card is to help them in their daily lives, with it they don’t need to have a residence, they can study at public schools, and they can live there life as any Jordanian.”

-- Is creating an alternative state for Palestinians the problem? --

However, despite the implications on daily life, there remains a strong reluctance to amend the nationality law due to the high number of Palestinians living in Jordan and the issue of an “alternative state.”

Creating an alternative state for Palestinians means that all Palestinians who immigrated to other countries take the nationality of that country, and will no longer be considered as Palestinians with the right to go back to Palestine.

However, given the high number of Palestinians in Jordan, supporters of the law have argued that it is necessary to avoid an alternative state becoming a reality.

Kharabsheh stated the law is based on an agreement with Palestine as a means to address this issue. “The Palestinian National Authority asked Jordan to not give the Jordanian nationality to any Palestinian whether he is living here or he is married to a Jordanian women,” he told Roya.

However, Shamma believes that too many people are worried about the alternative country issue, arguing that Jordanian women do not get married only to Palestinians. He went on to note that in many countries women are treated as equal when it comes to this right. “If we look at countries like Egypt or Morocco there is overpopulation but yet women can give their identity to their kids,” he said.

Alwakeel argued that the government is not subjective when they look at the alternative country issue saying: “A Jordanian man can marry four Palestinian women for example and give them all the nationality, so why does it become acceptable and normal when it’s a man.”

-- Will the day come where Jordanian women’s children get the nationality? --

Despite their different points of view when exploring at the nationality law, most Jordanians have expressed a wish for Jordanian women to pass on their nationality to their children one day.

“In these days it is really hard for them to have this right, especially with the wars that is ongoing around us,” Kharabsheh told Roya. However he still maintains hope that the situation will improve, noting: “The identification documents is a good step forward and hopefully in the future things will improve and change for the better for Jordanian women children.”

Fires break out in houses in Amman, ....