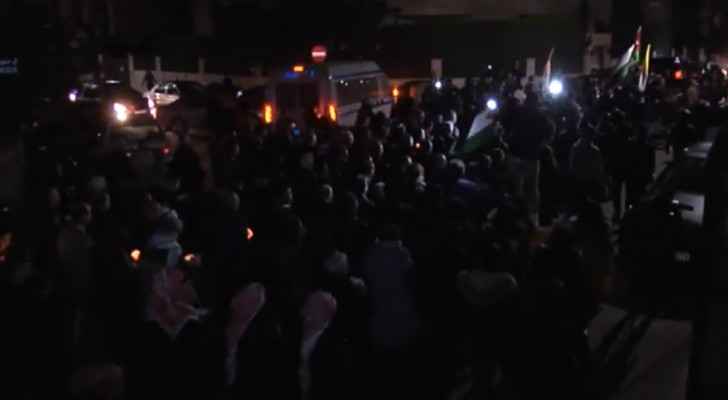 Hundreds of Jordanian Christians took to the streets of Swefieh, Amman, in silent protest of U.S. President Trump’s recent decision to recognise Jerusalem as the capital of Israel and move the U.S. embassy to the city.

Marching from the Greek Orthodox Church to the Anglican church, hundreds of protesters held candles and waved Palestinian flags as they were lead through the streets by Jordan’s bishops.

“I came here to refuse the decision of Donald Trump to move the embassy to Jerusalem. Jerusalem is the place of peace for all people - including Christians and Muslims. This place is blessed from God and it must be the capital of both Palestine and Israel. I pray to God to prevent all of the problems and damage in Jerusalem,” Father Theodoros from the Greek Orthodox church.

“Unfortunately, since the last two thousand years, wars have been fighting around the sacred city. It is pathetic, this city should be for everybody and everyone,” said Raja Khoury, another protester. “All religions should enjoy this city. I hope one day, sooner or later, we will have a two state solution with East Jerusalem as the capital of Palestine and West Jerusalem as the capital of Israel. Then both nations can live in peace,” he added.

Earlier this week, Jordan’s bishops release a statement decrying Trump’s decision on Jerusalem, warning of the dangerous consequences of such an announcement.

“The bishops express their solidarity with the Palestinian people in general and with the people of Jerusalem in particular, and with their brethren, the heads of the Churches in Jerusalem, who stressed in their message to President Trump that this decision will cause irreparable damage to the peace process,” the statement read.

Jerusalem is home to key holy sites for Christianity, Islam and Judaism, with Trump’s announcement last week sparking anger and protests across the Middle East.

In Jordan protests have taken place in downtown Amman and outside the U.S. embassy, alongside last night’s march in Swefieh. A number of Jordanian officials, political figure and parties and members of workers unions also took part in the mass rallies, with similar protests held in other governorates, including Karak, Madaba, Irbid, Ma'an and Zarqa.