Jordanian Foreign Minister to Tillerson: 'Two-State solution is the only way to peace'

Safadi and Tillerson during a meeting in Washington in February 2017. (Google+) 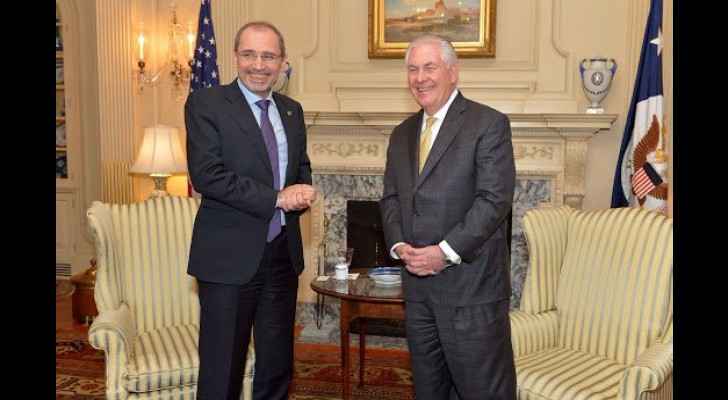 Foreign Minister Ayman Safadi spoke with his American counterpart Rex Tillerson on Tuesday and told him that Washington's decision to recognize Jerusalem as the capital of Israel has “halted political solutions from the region.”

Safadi had tweeted an hour ago: “Spoke with Secretary Tillerson on fallouts of recognizing #Jerusalem as Israel’s capital. Informed him of Arab League stand against it as violation of Intl law. Stressed 2-states solution only path 2regional peace. Only radicals benefit from growing tension, absence of horizons.”

In a very controversial step, Trump on Wednesday recognized Jerusalem as the Israeli capital, and announced that he will be moving the American Embassy from Tel Aviv to Jerusalem, saying this will enhance the peace process between Israel and Palestinians.

Since then, many demonstrations condemning this move were held across many Islamic countries and the world.