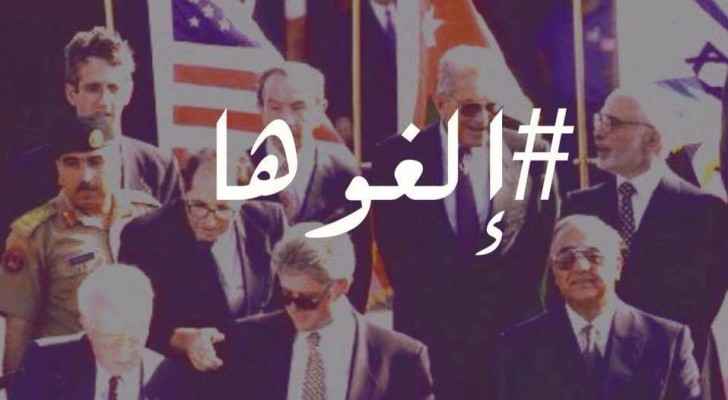 Jordanians are using Twitter to demand the abolition of the Israel-Jordan Peace Treaty from the government - also known as the Wadi Arabah Treaty, after Trump’s recognition of Jerusalem as Israel’s capital.

This comes after 14 MPs signed a Parliamentary Memorandum on Monday, calling on the government to issue an amended law which takes into consideration the abolition of the peace treaty.

MPs said their request is a response to the Israeli violations for all international laws and legislations, and for attacking the Hashemite Guardianship of the Holy Sites in Jerusalem.

They agreed to direct the memo to the government so that serious action can be taken.

The trending hashtag was used by hundreds of Jordanians, who expressed their anger and frustration at the US administration's decision to move the US embassy from Tel Aviv to Jerusalem and for recognizing it as the Israeli capital.

These are some of their tweets:

"#AbolishIt. We should not just stand idly by, no peace with Israel." "All treaties and agreements with the enemy should be at stake. Water, energy and academic exchange deals.. And the most important one is the 'deal of shame' .. Wadi Araba.. We should not wait for somebody to help us. We are alone, and we will remain alone."

"Jordanian decision-makers know that if the treaty was abolished, their nation will be behind them without hesitaion, and they will be their sword and shield.. What a bet. Bet on us and #AbolishIt."