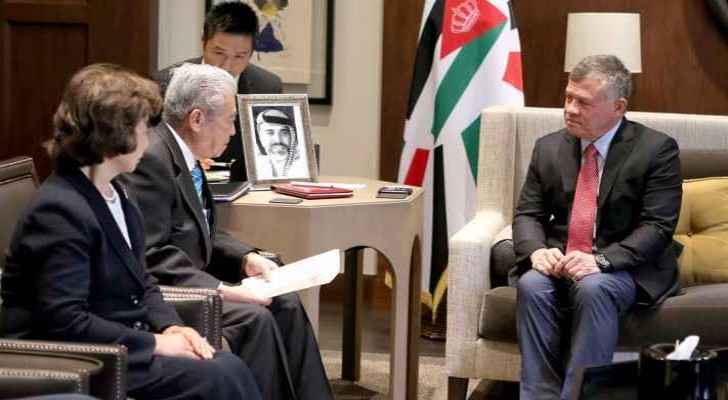 King Abdullah II welcomed the Head of Japan’s House of Councillors, Tchotchi Dati, on Monday, at his Al Husseiniya Palace in Amman.

During the meeting, both parties stressed the depth of the historical relations and the strategic partnership between the two countries in various fields.

They also praised Jordan and Japan’s level of cooperation in the fight against terrorism, which they believe poses a threat on the security and stability of the world.

His Majesty expressed his appreciation for the support provided by Japan to enable the Kingdom to implement development projects and programs.

King Abdullah and Dati also discussed the latest developments in the Jerusalem case, with the Jordanian monarch confirming that the Islamic Summit, which will be held in Turkey, will look into the challenges that have resulted from US President Donald Trump’s decision to declare Jerusalem as Israel’s capital and to move the US Embassy from Tel Aviv to the holy city.

King Abdullah further stressed the need for the international community to assume its responsibilities in taking positions supportive of achieving peace and finding a just and lasting solution to the Palestinian issue, stressing that the issue of Jerusalem must be settled within the framework of a comprehensive solution that will establish an independent Palestinian state with East Jerusalem as its capital.

Meanwhile, Dati pointed out that Trump’s Jerusalem decision calls for concern, because of the negative consequences it will have on the region.

Dati reaffirmed Japan’s commitment to finding a solution to the Palestinian-Israeli conflict.

Dati also confirmed his country's commitment to encourage investments in Jordan and to continue to support the Kingdom economically.