'The President Stole Your Land’: US company to sue Trump against cuts of national monuments 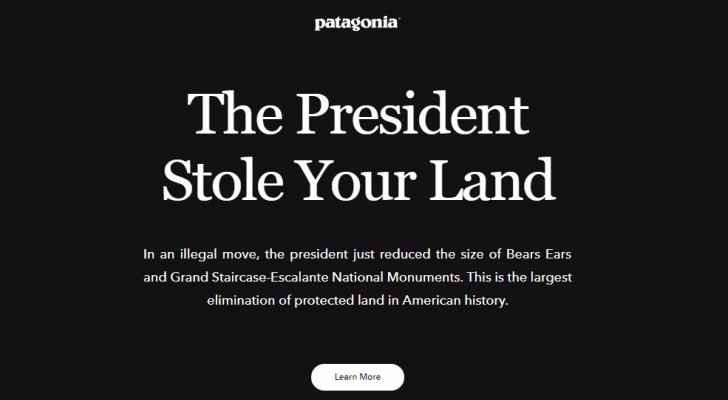 ‘The President Stole Your Land’, this is what you will see on Patagonia’s website homepage - the American outdoor clothing and gear company, who changed their website’s homepage to a black screen with these words.

The company slammed President Donald Trump after he revealed plans to shrink the size of a two national monuments in Utah State.

In details, Trump had announced earlier that his administration will reduce the size of Bears Ears and Grand Staircase-Escalante National Monuments in Utah, in an illegal move to eliminate protected land in the American history, according to Patagonia’s website.

On Monday, the White House released a statement to detail the President’s plans to cut the size of two national monuments in Utah, undoing the monuments protection for the first time in 50 years.

The Bears Ears are a pair of mesas located in southeastern Utah state. They were protected as part of and the namesake of the Bears Ears National Monument which was established by President Barack Obama in 2016.

Patagonia took such step to rally the public into joining their cause, to stop Trump’s plans.

Trump was widely condemned for drastically shrinking the two national monuments, which represent the biggest elimination of public lands protection in US history.